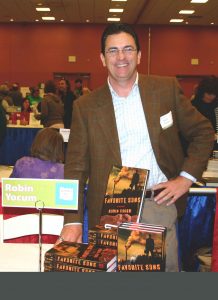 It’s great to introduce new authors, particularly authors with a talent for good storytelling. I met author Robin Yocum at this year’s Books by the Banks Festival in Cincinnati, Ohio.

Robin is an award winning crime and investigative journalist, with several non-fiction books to his credit. His first fiction novel Favorite Sons, is gritting story of suspense, mystery and secret pasts. As you’ll discover in the interview, in spite of being a gritty suspense author, Robin has a wicked sense of humor. Introducing Robin Yocum!

Welcome Robin, tell us a bit about yourself.

I grew up in the tiny, eastern Ohio town of Brilliant. I grew up wanting to play second base for the Pittsburgh Pirates. When reality sat in, I chose a career path where a lack of foot speed and a mediocre throwing arm would have no bearing – journalism. I graduated from Bowling Green State University with a degree in journalism, and worked at the Lancaster, Ohio, Eagle-Gazette and the Martins Ferry, Ohio, Times Leader before joining the Columbus Dispatch in 1980. I joined the Dispatch in hopes of getting on the sports desk. However, I found I liked news much better than sports and decided to pursue that avenue. I covered the police beat for more than four years and spent the remainder of my time at the paper as the senior reporter on the investigative desk. It was a great job. My first book, which I co-authored with fellow reporter Catherine Candisky, was Insured for Murder, which was the true story of a murder-for-insurance scheme that we covered for the paper. This was the story of a lifetime. It had it all – murder, sex of all varieties, international intrigue, beautiful women, deceit, a handsome playboy, etc. I’ve always said it ruined me for journalism. All other stories paled by comparison. My second book was Dead Before Deadline . . .  and other tales from the police beat. This was, as the title suggests, a compilation of stories – some sad, some funny, some tragic – from my days as a police reporter. I left the paper in 1991 (Both books were published after I left the paper.) and to become head of media relations at Battelle, a research institute in Columbus, Ohio. In 1999, I joined Bank One as head of media relations for the retail group. In 2001, I started Yocum Communications, a p.r/marketing consulting business that I continue to operate today. My most recent book is also my first novel – Favorite Sons, which is set in the Upper Ohio River Valley where I grew up. During my days at the Dispatch and while freelancing for several magazines I won more than 30 journalism awards. I live in Westerville, Ohio, and am the father of three grown children.

Right now I am focused on writing more fiction. I have long wanted to be a novelist and hope to pursue that avenue. Favorite Sons has received excellent reviews and I hope that will be a springboard for future novels. I am working on another novel which is loosely based on the life of my grandmother. I have promised my agent that it will be finished by the end of the year. Occasionally, I will write a freelance magazine article. However, my business takes up quite a bit of my time. Thus, if I have time to write, I need to keep the focus on my fiction.

I’m not sure I can a cite a particular character that has given me problems. However, I will relate a story of several interactions I have had with Susanne Jaffe, president of Thurber House, a literary center in Columbus, Ohio. Susanne is a gem and she reads my fiction before I submit it to my agent. Over the years, she has said to me on several occasions, “Robin, you have got to get some estrogen in your stories. You have all these rugged males, lots of testosterone, but no females. You have to have a love interest.” I have to make an effort to include a strong female character. I think Shelly and Margaret in Favorite Sons are both strong female characters. When I told Susanne that I was working on a novel based on the life of my grandmother, as seen through the eyes of a 13-year-old girl, she responded, “That should be interesting.” 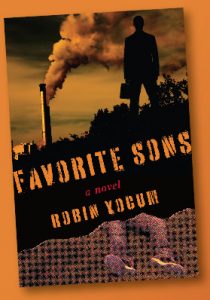 About a year, give or take. I wrote Favorite Sons in about six months. I found my voice early in the book and the process was surprisingly smooth. I prefer to write in the first-person. I find the narrative flows better.

My previous two non-fiction books took some research, but the novel came off the top of my head. I decided I like the fiction route better. I have a good friend who is a biographer. She’ll spend three days rooting through moldy boxes in a library basement to come up with a sentence or two for her book. No thanks. I like novels because they are uniquely mine. I’m tired of writing about the deeds, or misdeeds, of others.

It used to be Spider Solitaire, but now it’s Words With Friends. Wow, what a distraction. In reality, the most difficult part of writing is my own impatience. I get in a hurry to finish and have to force myself not to hurry, particularly when editing. The other difficult part is finding enough time. I’m running a business and it takes up a big chunk of my time. I use a digital recorder in the car to capture ideas when I’m driving.

Pepper Nash – an irreverent, successful, millionaire businessman who enjoys life. At the end of the day, isn’t that what we all want to be? Well, all that and being a successful writer.

I’ve only written one novel and the hero was Hutchinson Van Buren. I guess he wins.

I really like Cletus Purcel who is a sidekick in the Dave Robicheaux novels by James Lee Burke. Burke is one of my favorite writers and he creates great characters. Cletus drinks too much, talks too much and too often takes things into his own hands, but he is an intensely loyal friend to Robicheaux. He is a terrific character.

I think it depends on the writer. Burke’s Dave Robicheaux is a damaged human who seeks decency in others, but understands there is great evil in the world. Clive Cussler’s Dirk Pitt is like a Saturday afternoon matinee idol – a man without flaw. They both work for me. I tried to make my hero – Hutch Van Buren – a study of human nature, where there is no black or white, but shades of gray. When Hutch does what he knows is morally wrong, I allow the reader to get inside his head and see the justification. There is a character in my book who uses his financial influence to preserve the reputation of his son. Given the same set of circumstances and the financial wherewithal, who among us wouldn’t do the same thing? Most would say they wouldn’t, but you don’t know that until it’s your child and you’re faced with that decision. Again, shades of gray. At the end of a book, an enduring character must to what is right, or he loses sympathy and credibility.

Probably Mark Twain — a younger Mark Twain. The older version seemed to be awfully cranky. I have always admired Twain’s writing and think he would make great dinner guest.

1) Mark Twain – A Connecticut Yankee in King Arthur’s Court is my all-time favorite book. 2) James Lee Burke – Great writer; great storyteller. 3) John Steinbeck – I’m not sure anyone ever captured the soul of America like Steinbeck. 4) Clive Cussler – He’s not a great writer, but he is a great storyteller. 5) Garrison Keillor – There are times when I have to set his books down because I’m laughing so hard. It’s dangerous to listen to them on tape when you’re driving.

Destiny of the Republic by Candice Millard; The Seamstress of Hollywood Boulevard by Erin McGraw. Currently reading Break the Skin by Lee Martin

I just spent a half-hour trying to come up with some secret talent. I’ve got nothing. I don’t juggle, don’t know any card tricks, can’t sing a lick. Wow, this is depressing. I wish you hadn’t asked me that question.

Up until 30 minutes ago I always wanted to be asked: Do you have a secret talent readers would be surprised by? We see how well that went.

To learn more about Robin and his books head to www.robinyocum.com, or Facebook for Robin Yocum and Favorite Sons.