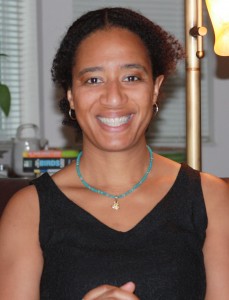 I met author Myiram Chancy quite by accident. I was going to meet another author for an interview and her book cover caught my eye. I was intrigued that her work was about the women of the Caribbean. Despite the Caribbean being a close neighbor, I was surprised at my lack of knowledge about the area and its people. Ms. Chancy writes in-depth about the true character of the region; their culture, their spirituality and their strength.

Her work has received numerous awards.  Her book, The Loneliness of Angels was awarded the Guyana Prize in Literature Caribbean Award, Best Fiction 2010, this September.  The Guyana Prize is an important literary prize in the Caribbean; this is the first time they have awarded an all around regional award in this category.

First, tell us a bit about yourself. Where you’re from?

I was born in Port-au-Prince, Haiti and subsequently emigrated to Canada.  I came to the US to do my Ph. D. at the University of Iowa and then stayed working as a professor of literature in various places.

I know you’re work focuses on women’s issues, particularly women of the Caribbean area. Can you tell readers about that area and the issues and problems facing those women?

You’ve written fiction, poetry, and essays. Which of these do you enjoy most and why?

I enjoy writing fiction the most but it takes the most time; critical essays are the easiest to write because they tend to be formulaic whereas fiction (at least literary fiction) is more challenging and needs to be original both in form and in content – though I do try to stretch what can be done with in criticism, as I’ve done in my books of literary criticism utilizing personal narrative, fiction and photography within those texts.  I enjoy writing poetry the least though I was encouraged by Raymond Carver at the end of my teen years to better understand the uses of poetry to fiction.  I don’t often, if ever, get writer’s block, but I usually can tell if I’m tittering close to writer’s block if I find myself writing poetry.

You are donating 100% of profits from two of your books to the relief efforts in Haiti. The earthquake hasn’t been in the media often since the initial quake. Will you tell readers what has been done in the way of relief efforts, and what still needs to be done?

Only about 1% of moneys collected for reconstruction has gone directly to the Haitian government; that figure alone lets us know that a great deal more needs to be done, and especially with regard to how aid flows into disaster areas.  My own funds are going to grassroots organizations on the ground that know best how to utilize resources within their means.  Readers can go to my website for more information regarding where to donate responsibly.  This summer I saw firsthand that there has been more progress than has been reported; streets are cleared of rubble; people in all walks of life are moving forward and creating new initiatives which means new jobs and opportunities in different sectors.  Often, such efforts are isolated or disconnected but I found the capital vibrant and full of life so despite the lack of infrastructural organization, there is a great deal of progress going on.  Readers can also follow what is going on in Haiti today by checking out the following website: http://www.otherworldsarepossible.org/Haiti

Your novels are now being taught at many universities, can you explain what message(s) they bring to the curriculum?

I’m sure this would depend on where and who is teaching the texts.  The novels are taught in Introduction to English Literature classes, courses on Caribbean and Latin American literature, immigrant literatures, and women’s studies.  Since I don’t write for the curriculum, I couldn’t say how professors intend to use them but these are the contexts in which I’m aware they’ve been taught.

Can you give readers some insight into Haitian culture, and things we’d find surprising or interesting? (In the States, we don’t hear much about the area, or its history, unless there is a natural disaster. It seems we only know the area as a vacation destination. I’d love it if you could give us some cultural insight.)

Haitian culture is varied and complex.  I understand that most Americans think of Haiti as a disaster area, whether in terms of history, or in terms of recent natural disasters, without understanding the way in which US interests have played a significant role in the magnitude of those disasters.  There are stereotypes related to poverty and spiritual beliefs (especially in the distortion of Vodou).  Haitians are resourceful, infinitely capable, with a rich history and cultural legacy.  Poverty has birthed ingenuity and tenacity.  In my novels, I variously investigate slices of Haitian history and make connections to how these legacies impact the present-day, often cross-culturally (between France and Haiti, the US and Haiti, for example).  I also look at how class structure impacts relationships between Haitians, immigration (between the US/Haiti and Haiti/Canada), and, in the latest novel, the ethnic complexity of Haiti by bringing to life multi-ethnic characters of Irish, Jewish/Syrian, French, African backgrounds and revealing what they have in common.  I’m also heavily invested in spirituality and the ways in which Haitian culture is sustained through spirituality.  With the latest novel, which investigates mysticism cross-culturally, between Celtic, Kabbalistic, and Vodou mystical practices, I’m arguing for a realization that Haiti and Haitians are not “a world apart” but active participants in the world.

I’d also like to know a bit about you the writer.
Who has been the most difficult character for you to write? Why?

In the most recent novel, The Loneliness of Angels, the main character of Catherine was probably the most difficult to write because she is an ordinary person with ordinary problems called upon to find her way to becoming extraordinary.  Since the novel charts her development as someone who is hardly conscious of her gifts, that meant having to deal with a character who is spiritually underdeveloped and, in many ways, unconscious; it’s difficult to write through awakening given that for a large span of the novel, this character occupies a space of stasis which made her less interesting for me in some ways, less compelling, though, ultimately that is the point of exploring how she comes to awaken. 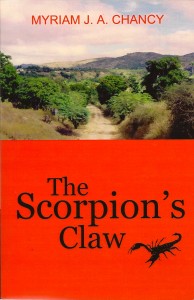 It all depends on the book.  The span of time has ranged from a few weeks to years.  Loneliness took five to six years, counting revisions and editorial changes, while an earlier novel, The Scorpion’s Claw, took approximately six weeks to write but then ten years to publish!

The most difficult part of writing if you are someone interest in the life of the mind and of the spirit, in communicating rather than making a name for yourself, that is, in becoming a literary writer engaging mind and spirit rather than being solely a commercial writer hitting upon a fad style or fad issues, is sticking to it.  Writing is isolating work and it is often difficult to do the work without having any guarantee of readership, especially if one’s work deals with difficult or marginalized issues.  Believing in one’s work and carrying through is the most challenging.

I would probably enjoy having dinner with James Baldwin and Margaret Atwood at the same table and have them talk about writing in different genres, editing, teaching and how they would respond to the new trends in writing, especially those that advocate for the depoliticization of the writer given that they were/are both highly engaged politicized writers.

I don’t have any favorites at the moment.

I’m very good at bringing African violets back to life.

I wish I were asked more questions about what I am attempting to do with the novel form, with craft.