At the Desk: Kate Douglas

A Look at the Writing World of Author Kate Douglas

Our house is very organized and neat because my retired husband keeps it that way. In order to write, I need to be surrounded by clutter. Go figure! I’ve always been this way—I can’t create in a sterile environment, and while I’m not really all that aware of the clutter, it makes me feel more comfortable. And Sheila knows exactly where I live and what it’s like here (you actually lived in Cobb for a while, didn’t you?) which is a beautiful mountain area north of San Francisco. Christine Feehan used to live just down the road, and Jayne Ann Krentz spent her teen years here—she worked in the local coffee shop as a teen—so I’m hoping that amazing writer karma is still in the area and will now attach itself to me. Just think—if I cleaned up my office, I might somehow mistakenly clean away some important juju!

I don’t work at a desk because I’ve got a bad back—officially called “degenerative spinal arthritis” which is just a fancy way of saying I’m getting old and my back gets sore when I try to work from a regular chair. So, I sit in an old leather recliner that belonged to my son-in-law’s father. When Remo passed away, I inherited his favorite chair, and it seems to work perfectly for me. Now, Remo Pastene was an amazing guy—he was the one who invented “flip flops,” called thongs back in the fifties. I wore them every summer as a kid and never dreamed I’d one day be sitting in their creator’s chair, writing my sexy paranormal romances, so that’s more good, creative juju in my office!

But, I need to give you the tour so you know what I’ve sent pictures of. 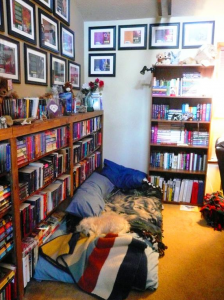 #1 is the view from the door. My office is upstairs—the second floor at this end of the house, but actually four floors from my husband’s workshop in the basement, which is downhill from here. Probably why we’re still so happily married after forty years—we’re separated by four floors in a house built on five levels! You’re looking at Rufus the mutt on the little bed I have up here for those days when I put in marathon hours of writing and need to take breaks when my eyes give out. Rufus is always with me when I’m working. He’s 14, and I don’t know what I’ll do without my mini-muse when he’s gone. Bookshelves to the left and straight ahead are only a fraction of the books in my office. It’s a big room. 14×22, I think, and the ceilings are sloped but quite high-12 or 14 feet, I think. 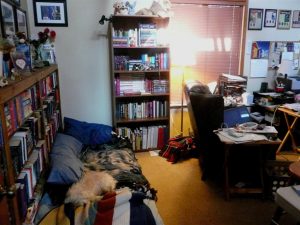 #2 is a wider view and takes in my recliner and the cluttered tables on either side. I’ve got all my notes there for the current book, including pictures of models, actors, etc. that I use as visuals for my characters. I’ve discovered that having those photos handy helps me recall their physical descriptions so I don’t have to keep referring to my notes in these stories with multiple characters. I didn’t do that with Wolf Tales and wish I had, as I ended up with 56 Chanku by the time all the babies started showing up! 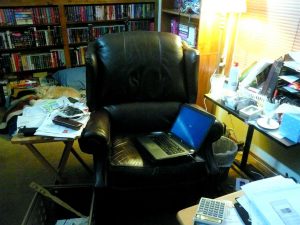 #3 is my official work station. I think the chair, which used to have Remo’s butt print, is permanently reshaped with mine. But I come up here most days before eight and I’m often still working at midnight, so having a comfortable place to write is paramount. 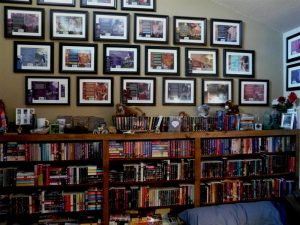 #4 is my favorite wall in the whole house, with all my Aphrodisia book covers framed, some of my writing awards and other things important to me. That wall is what I look at when I’m even the least bit depressed or frustrated by a story—it’s a reminder of what I’ve accomplished in my 6 years with Kensington. A lot. Sometimes it’s easy to forget when you’re mired in a story and not seeing the way out, that there is always a way, and it will work. 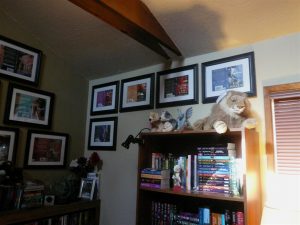 #5 is the wall with my Kensington Zebra covers. I need to keep visible reminders around that yes, I really do get to write books for a living! And yes, I’m the first to admit that it still hasn’t totally sunk in! Remember, for me, the road to publication with a well-known, NY publisher was a full twenty years. I am still living a dream I never expected to have, and it’s still every bit as much fun as it was when I signed the contract for my very first Wolf Tales. 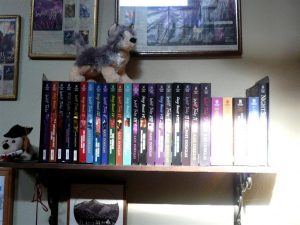 #6 This is the shelf with all my Kensington titles to date. I plan to keep two full sets—one for each of our kids. They don’t read my books—I don’t think they want to know just how sexy they are because mothers are NOT supposed to know about such stuff (I know—all children are virgin births, right?) BUT, I will leave each of them a full set when I’m gone so that one day the guilt will win out and they’ll actually read them. And then they can be embarrassed for real. 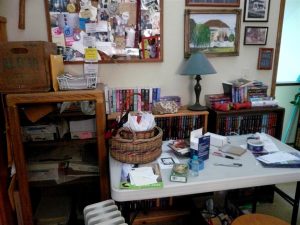 #7 This is my work table, where I wrap up prizes my readers have won. Sometimes it gets totally buried in stuff and I have to clean it off, but right now it’s actually pretty clutter free. The shelves behind the table are filled with my last full sets of Wolf Tales/Sexy Beast books, all saved to donate to Brenda Novak’s diabetes auction. I’m good for the next four years, and then all my complete sets will be gone. 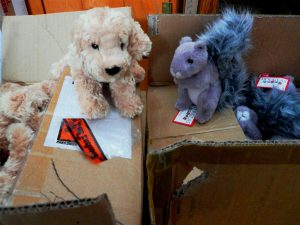 #8 is a picture of the order I just picked up on Friday—more little “Bumper” dogs to give away in celebration of my final story in the DemonSlayers series, CrystalFire, which releases in April, and the squirrels are to promote Dream Bound, the first novel in my new Dream Catchers series. A little gray squirrel has a very big part in that particular series!

Unless I’m away from home, I spend hours each day in my office. It’s cluttered and sometimes a bit dusty, but it’s the space where, for some reason, my mind is always able to travel freely. I call it my writing cave, but it’s more than that. I remember reading a book long ago called “A Room of Her Own,” about the need for women to have a space that’s all theirs, where they can create or just be. I’ve had a spot in every home we’ve lived in over the years, but this one is by far my favorite.

In 1998, she published with a small ebook publisher before anyone knew what an ebook was, but it wasnt until 2005, a full twenty years after finishing that first romance, that she signed with a New York publisher.

Kate and her husband of almost forty years have two adult children and five grandchildren, with number six on the way. They live in the beautiful mountains of Lake County, California, north of the Napa Valley wine country.

Readers Entertainmenthttp://dayagency.com
Previous articleFord Motor and NPR Have an “App for That”
Next articleAt The Desk: With Erica O’Rourke