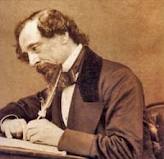 February 7, 2012 marks the 200th birthday of  Charles Dickens. In London, the Charles Dickens Museum and Dickens 2012 are planning a birthday bash for the world famous author. A wreathlaying ceremony at Westminster Abby will be held at 11:00 a.m. on February 7th. Actor/Director Ralph Fiennes and biographer Clair Tomalin will be just two of the Readers “who will gather in Poets’ Corner where Dicken was buried in 1870.”

“I am delighted to take part in the celebrations for Dicken’s 200th birthday anniversary. It will be a great honour to read an excerpt from Dicken’s work in Poet’s Corner to commemorate one of the world’s greatest writers, and a man whose imagination has a lasting impact on the creative industries, including film, theatre and media,” said Ralph Fiennes.

In a statement released from Dr. Florian Schweizer, Director of the Charles Dickens Museum and Dickens 2012: “On 7 February people around the globe will take part in the Dickens bicentennial celebrations, from Hong Kong to California. The wreathlaying ceremony at Westminster Abbey will bring together visitors from more than 60 countries, many representing the wide range of Dicken’s own professions and interest groups including authors, actors, social campaigners, journalists, charity workers, fundraiser and the public sector. Poets’ Corner, with its rich and unique heritage and literary associations, is the perfect site to honour one of the greatest creative minds this country has ever seen.”

There are many additional activities and events scheduled. If you are interested in tickets or further information, you can contact Matthew Arnolid – Matthew.arnoldi@westminster-abbey.org or Events Department, Charles Dickens Museum, events@dickensmuseum.com

A sneak peek of The Spinster Kang by Zoe S. Roy! Blurb: Thirty-two-year-old Kang is a new immigrant in Toronto. Having an older sister who was...
Read more