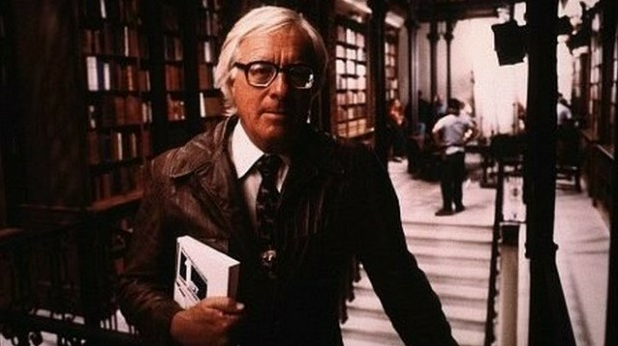 I have a running joke about myself–in the sense that I’m not sure if anybody really pays attention when I bring this up on Twitter–which is that I’ve got a hair-trigger reflex when it comes to crying at the movies. It’s true, actually, and one of the films that inevitably gets the tears flowing is Francois Truffaut’s film version of Fahrenheit 451, specifically the scene at the end where Montag has met up with the rebel underground and we see the father teaching his son to memorize a book, preserving the legacy of literature in their dystopian future. It’s a scene I thought a lot about the afternoon I found out that Ray Bradbury had died, and even without the film in front of me I found myself getting choked up.

And I started thinking about how much Mr. Dark in Something Wicked This Way Comes terrified me, and how much joy I took in reading the short story “Any Friend of Nicholas Nickleby’s Is a Friend of Mine,” and how moved I had been by a comic book adaptation of another short story, “The Man,” about an astronaut who obsessively chases after a Jesus-like figure from planet to planet. It’s probably not an exaggeration to say that these and other Bradbury stories formed an integral part of my emotional identity; I may not think of them every day, but when I have occasion to remember them, the feelings I have seem almost as strong as when I first read them nearly thirty years ago.

Ray Bradbury is a literary touchstone for my generation: Because we were assigned Fahrenheit 451 or The Martian Chronicles (or maybe both!) in junior high or high school, he’s the science fiction writer that just about everyone, even the folks who didn’t like science fiction, has read. (I was a generation too late to recognize that, when these stories were coming out, he acquired a reputation as the “okay” science fiction writer, the one the literary establishment could admit wasn’t pumping out schlock.) For some of us, he became the gateway to other amazing storytellers who chose to work in a fantastic vein. I probably would have found my way to writers like Harlan Ellison or Robert Sheckley or Mary Doria Russell eventually, one way or another, but reading Bradbury gave me the foundation to “get” them (or at least think, as a teenager, that I’d gotten them) the first time. He made me realize that science fiction and fantasy could be vehicles for serious stories about real people in fantastic circumstances. His stories guaranteed that I could never take anybody who dismissed literary fiction seriously.

So many of us today feel the same way. Take a look at John Scalzi’s blog post “Meeting the Wizard”  or Junot Diaz’s New Yorker tribute “Loving Ray Bradbury.” Even President Obama was moved to testify to Bradbury’s impact: “His gift for storytelling reshaped our culture and expanded our world,” the president said. “But Ray also understood that our imaginations could be used as a tool for better understanding, a vehicle for change, and an expression of our most cherished values.”

That’s exactly right. Scalzi and Diaz and I are from the same generational cohort, with President Obama just about at the early end of it, depending on how you figure these things. For the four of us, and for millions of other Americans, Ray Bradbury showed us–not how to dream, exactly, but a more powerful way of dreaming than we’d previously known, one many of us have done our best to emulate–as fiction writers or simply as human beings–into our adulthoods, until we can pass the stories on to another generation.

Ron Hogan is the founder of the literary website Beatrice.

Someone To Cherish by Mary Balogh Is love worth the loss of one’s freedom and independence? This is what Mrs. Tavernor must decide in the...
Read more