I am a Thriller Fest virgin… or I was until this year. I’ve attended three other conventions over the years; Romantic Times (RT) and Book Expo of America (BEA) and Comic Con in New York.

However, the International Thriller Writers (Thriller Fest) wasn’t on my ‘hit list’, because frankly, I am not a thriller reader. I am not shy about, nor do I hide what I read. On my night stand there’s an endless TBR pile. The book shelves, Nook and iPad you’ll find I have a library of romances. I am a romance reader devotee. I have so many books, that my mother tries give them away…. ‘you wanna read, take a book!’ I have so many books that, two years ago I finally caved and bought a Nook eReader.  I HAD too because, it was either the kids or my books and well… I LOVE my books! ‘Smut’, ‘Mommy Porn’ a few terms it’s been called. I have opinions about those terms but that’s another blog post.

There have been, many, many fan girl moments for me over the years. My friends witnessed all of them and, they’re quite hilarious.  The time I went ga-ga meeting Toni Blake. It happened unexpectedly when after one RT event someone tapped me on my shoulder and asked me to take a picture of her with her group, ‘sure‘ I said, and when I handed the camera back I looked at her, she was so familiar to me… and then it clicked… ‘YOU’RE TONI BLAKE!! OMG!!’ I was quite animated too, SQUEE’ing and jumping up and down. ‘I’m Charina!’. She was truly delighted were able to finally meet. We had been emailing for several years, discussing her books, but had never met in person. It was wonderful.

Then the time I met author Shelley Bradley (Shayla Black).  Shelley and I go way back to the time when she wrote historical romances and there’s this one character that I’ve been dying for him to get his own book. My first RT, I meet her and instead of… ‘nice to meet you, I love your books‘, my very first words to her were, ‘when is Darius going to get his own story?‘ To this day, every year at RT I see Shelley, she says, ‘I know Charina.’

I met author Nicole Jordan at a private party. She is a great author and I’ve read her for years. We correspond regularly, she’s

an amazing woman. At the same party I bumped into Kat Martin. ‘YOU’RE KAT MARTIN,’ I squealed.

At this year’s RT I met Anne Rice,  that was pretty freakin’ awesome!! Edward Cullen who? Team Lestat ALL THE WAY!! Now THAT is a vampire – he doesn’t sparkle. She was all business, a true professional.

Then the meeting of all meetings and for me a great honor to meet Lisa Kleypas. I felt that I was in was being in the presence of greatness. Lisa Kleypas could write a grocery list and I’d read it. I was in so much awe, I had no idea what to say; and for those who know me, that’s a phenomenon of Biblical proportions. Meeting the author that birthed Derek Craven and Zachary Bronson and of course, I didn’t take a picture with her.

Meeting your favorite author(s) is a special event. You have the chance to tell them how much you appreciate their work. Because truly, it’s all about them and what they give back to us, their faithful readers. I appreciate every single one of them; their books helped and comforted me during one of the most difficult times in my life. When I needed to escape and leave myself for a while and immerse in happily ever after. I want to give back to them by letting them know what their books meant to me, how much they’ve touched me. As a reader, there’s an emotional investment in the story and the characters and the world the author creates. As you’re reading, for that stretch of time, they’re friends and when I connect with a book and the characters – that’s the author on top of their game, a great author, and it’s pretty amazing.

There have been many more ‘fan girl’ episodes, too many to list. I tell you this to convey that I not only am I a fan, but a lover of reading and highly respect the authors that create such wonderful stories.

When I attended Thriller Fest 2012, I was a little bit at sea because I wasn’t completely familiar with the authors and their work. However, I’m a not total thriller novice. I’ve read Scott Turow and John Grisham. That was back in my casual reader day, before I was the avid reader that I am today.

My very first Thriller Fest ‘fan girl’ moment came when I attended the David Morrell readers panel. Honestly, I had no idea who he was, but I knew enough that he was an esteemed author. My boss wanted me to sit in on the panel, take some pictures and notes of the lecture and also to ask if he was willing to give a short interview.

I wanted to ‘flip him’ a term we made-up when referring to doing a video interview using the Flip video camera (wonderful device, when you want to conduct on the spot interviews).

It was after he spoke and armed with my flip and camera, I stood with a group waiting for my turn to speak with him. I was literally the next person, five minutes before meeting a ‘Thriller Master’ when I looked down and saw someone holding a paperback with the his name on it. I tilted my head to take a peek (I’m so nosy), and there in big, bold letters, First Blood and why should that sound familiar to me? I asked the gentleman to turn the book over to read the back blurb. There it was, John Rambo, Vietnam vet and the byline, ‘now a major motion movie starring Sylvester Stallone.‘

Now, in my youth I was a huge Sylvester Stallone fan. My all-time favorite movie is Rocky. Suffice to say, it quite a shock to me Rambo was based on a book? Who knew? I sure as heck didn’t. Apparently, I was the last one to get that memo. When it was finally my turn, me who you can’t shut up when it comes to talking about books, am completely speechless. I was in dumbfounded, this was ‘Rambo’s daddy’. I had to compose myself, I had a job to do. I was able to ask Mr. Morrell if he had time for a small interview and he was so gracious and said he would. However, it was better if we did the interview after the author signing and we set up a time to meet up.

Now, book lover that I am and I just met Rambo’s father, and of course I HAD to buy the book and get it signed. I ran to the book room and frantically searched for First Blood. Thank goodness for author John Land. He so rocks.  ‘John! Where’s First Blood? ‘. He personally took me over and showed me where it was. Like the ‘fan girl’ I am, (I really should be president of ‘Fan Girls of America’) I stood in line to get my book signed. To make this wonderful experience complete, the official Thriller Fest photographer was behind me having his own ‘fan boy’ moment meeting Mr. Morrell.

I got my book signed, which I will treasure always and afterward, I was able to do the interview with Mr. Morell. He was the kindest, most polite and wonderful man. He truly appreciates his fans and now he’s got one for life.

Thriller Fest was amazing. I went to the awards dinner and sat with the wonderful author Nancy Nagle, who took pity on me so I wouldn’t end up sitting alone. Jennifer St. Giles and other authors showed up and it turned out to be a lovely evening. Wouldn’t you know it, at a Thriller awards dinner, the topic of conversation was 50 Shades of Gray and its impact on publishing.

For me it’s the experience of meeting with authors, the personal connection you make with them and truly showing my appreciation. This year I wasn’t there as a fan, I had a job to do. I met some truly amazing authors – Andrew Peterson, Nancy Nagle, Sandra Brown and Catherine Coulter, John Land and Joseph Finder. But I did manage to have a fan girl moment and that’s what made my first Thriller Fest all the more special.

HERETICS BY V.S. HOLMES The fourth book in V. S. Holmes’ archaeological sci-fi about where we come from and where we’re going arrives in stores... 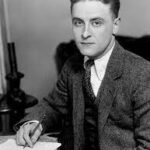 Jocie McKade - 28 September 2021 0
The papers, manuscripts, and edits of iconic author F. Scott Fitzgerald have been recently digitized and are now available from the Princeton University Library....