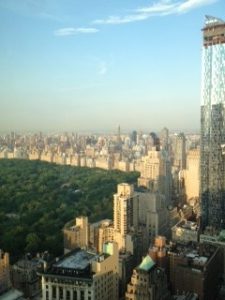 The Hearst building overlooks Central Park and the great metropolis that is Manhattan.  Within the posh confines that house one of the world’s leading magazines, Cosmopolitan, the media giant held a private party announcing a partnership with another powerhouse, Harlequin Publishing.

The two companies determined that they shared a common readership and that their brands complimented one another, so the idea to include short stories in the magazine was born.  Harlequin selectively chose several potential authors for the program and forwarded that list to Cosmo.  Harlequin will be responsible for editing the stories, but final approval goes to Cosmo.

The first of many popular authors to participate in this new venture was also in attendance, Sylvia Day, whose popular Crossfire series became an international success.

The hope is that by marrying short stories to the young, hip, Cosmo readers it will give added value to the magazine and bring in a new set of readers who will, hopefully, advance on to full novels.  It’s a win-win-win-win for Cosmo, Harlequin, authors and readers.

This is easily one of the most exciting stories coming out of BEA this year and many are looking forward to the official launch of the program in August of this year.