Show Your Love for Your Librarian 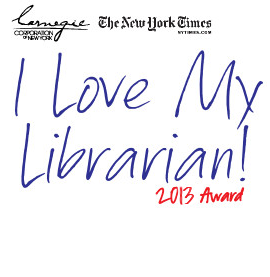 Is there a special librarian in your life? The one that tells you about the latest mystery, or finds the perfect research book for you? If so, nominate them for the 2013 Carnegie Corporation of New York/New York Times I Love My Librarian Award. Time is running out as nominees are only being accepted until September 6, 2013.

The award is to recognize librarians nationwide and the patrons and communities they serve. You can nominate a public, college, school, university of specialty librarian for the award. Here’s more info from the American Library Association:

The award is a collaborative program of Carnegie Corporation of New York, The New York Times and the American Library Association.

You can find all the nomination forms and details by following this link.