Author Renee Bernard Shares A Bit of Her Christmas Tradition! 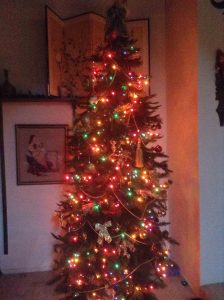 Every tradition we have seems to be in a state of evolution as our girls add their own imaginative twists to the holiday.  But so far, the one that’s holding is our family tradition to make sure Christmas Day is a day-long event.  Instead of a frenzy of paper ripping, we deliberately slow down, open, assemble, and play with each toy as they receive it.  If a toy is a hit, and someone wants to do nothing but play, play, play for thirty minutes or more.  So be it!  We’re thrilled.

If someone gets new clothes, then it’s a fashion show right on the spot!  We sip cider and nosh on treats and visit and laugh and watch the fun.  If the girls suddenly decide that they have enough wrapping paper to build a fort for the kittens, then its craft time!

If we’re opening our gifts late into the afternoon (or the evening!) because we’ve streeeeeeetched it out, then all the better!  We make the most of whatever is under the tree and then there’s never a worry about how little or how much we have.

We talk about the person who sent the gift and make those phone calls of thanks if we can, and fingers crossed, when my girls are grown, all they’ll remember is what fun Christmas Day is and how much they are loved, and never think of it in terms of “loot” or “piles of stuff”.

Christmas flies by so quickly…so my husband and I love the molasses pace of our Christmas mornings.  We cheat and make it last a little longer! 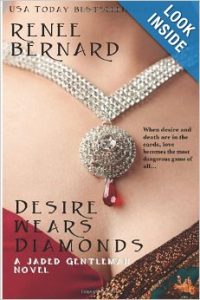 The shy soldier and self-appointed guardian of the Jaded, Michael Rutherford, is faced with the ultimate test of his loyalty and honor when he meets the woman who is at once his perfect match and the worst choice he could ever make. The final battle with the Jaded’s greatest enemy will force him to choose between the brotherhood he has vowed to protect and shielding the innocent lady he comes to love. For Michael, it is a dance with the devil for a chance to taste the kisses of an angel. Grace Porter is no ordinary wallflower or shy spinster hiding in the shadows of her brother’s London home. She is a quiet rebel with secrets of her own and a woman who dreams of an independent life, free to pursue her dreams as a writer. Her imagination holds the key to her survival, but it fuels her retreat from the colorless world around her. Until Michael Rutherford’s arrival upturns her every fantasy and threatens her sanctuary with his lies. His embrace is intoxicating to her senses but Grace isn’t the kind of woman to lose her head—or her heart. It’s a knuckle-biting race to the finish for fans of the Jaded as fan favorite, Michael Rutherford, discovers the identity of the Jackal and Michael learns that sometimes the price to pay for justice is the sacrifice of hope and happiness. He will risk everything as the Jaded call him out as a traitor and nothing is what it seems. ***BONUS MATERIALS WITH THIS PURCHASE*** An Original Penny Dreadful by Mr. A.R. Crimson! “Poseidon’s Curse or The Fatal Storm” – A fantasy serial from the creative mind of Crimson himself! AND Special Reader Notes and Inside Information from the world of The Jaded Gentlemen!

Does anyone really read these things? I’ll pretend they don’t and say this. It’s very true that my father was a chaplain in the Navy and that he has sworn to never read a word I write (not that this keeps him from telling everyone he sees that his daughter writes romance novels that are too hot for him to read.) See the humor?

I’ll just take the opportunity to say thank you. For reading and caring enough to take a look at that odd woman on the back cover. I’m truly grateful.