Boxing at the Bushes – Christmas with Author Nancy Bush

Boxing at the Bushes

Around our house, true holiday traditions are few, mainly because we do something different every year. Before our daughter, Kelly, left for college, my husband, Kelly and I would often spend Christmas Day on an airplane on the way to visit my husband’s mother, because that was the only day we could get last minute seats. I can remember the whole plane singing “Let It Snow!,” led by the Santa hat-clad flight attendants as we flew from Oregon to Texas. There was also the year that we had a Winter Solstice party, and it snowed the most it had in three decades. For the brave few who chained up their tires and made it to the party, we served them out of our “seasonal
refrigerator,” the deck off our kitchen.

But even while we change up our yearly plans, the one holiday mainstay is our Christmas cactus, which blooms every December no 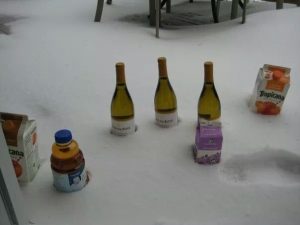 matter how much we neglect it all year long. It’s blooming even as I write this. Last night my husband and I tried to think how long we’ve had that same plant, and we decided it must be at least twenty years. I sometimes worry the cactus has better holiday organizational skills than I do.

Our pug, The Binkster, whom I discovered at a local breeder after creating a pug named The Binkster for my Jane Kelly Mystery Series, has been my reluctant test subject for possible new holiday traditions. Although I liked them, she felt reindeer antlers were a miss, and Jingle Paws were simply an instrument of torture. This year Binks is wearing only her fur, which comes off in such copious amounts it’s amazing she hasn’t turned into a Mexican hairless. She would like to enjoy Christmas dinner at the table, but after finding she’s developed a taste for spilled champagne, we decided it was better if her bowl remained on the floor.

This year, we’ve decided to celebrate Christmas on December 26, as that’s the day Kelly and her two

daughters arrive to celebrate the holidays with us. I’m planning to bake a turkey with all the trimmings. In the United Kingdom December 26 is called Boxing Day, which traditionally was when servants or tradesmen received gifts from their employers, a “Christmas box”. Maybe I’ll have to make Boxing Day a new tradition.  Make special gift boxes and prepare a turkey dinner the day after Christmas every year.

Oh, who am I kidding. If the Christmas cactus had eyes to roll, it would be rolling them. It’ll be something new again for us next year, which is the closest thing to a holiday tradition the Bush family can claim.

Whatever your holiday traditions, reading is a good way to unwind once the last gift is unwrapped. Check out Nancy’s Book-a-Day giveaway on www.nancybush.net and keep up with her, her sister, Lisa Jackson, and The Binkster on her Facebook page.

Readers Entertainmenthttp://dayagency.com
Previous articleSteve Berry – His Travels Inspire His Christmas Traditions But Home is Where the Heart is
Next articleThe Responsible Reader by Lance Manion