How to Kill A Killer You Trained Yourself… 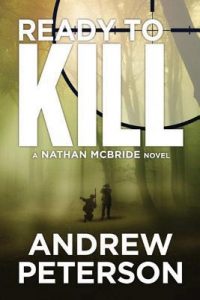 A note referencing a secret US operation appears in Nicaragua, and there is only one man suited to the task of making this information compromise disappear. His name is Nathan McBride, ex-Marine Corps sniper and newly retired CIA operations officer. McBride is about to be called out of retirement, and, with the aid of his longtime companion Harv, he must journey to the jungles of Central America on a mission to stop a dangerous enemy. Unfortunately, McBride knows this destination all too well—he nearly did not escape it decades ago, and the experience has left him physically and emotionally scarred. In order to be successful in his mission, he must first overcome these personal obstacles. And he also has to survive a showdown with the most effective killer in the region…the one McBride trained himself. Survival necessitates being Ready to Kill. The fourth installment of the Nathan McBride thriller series, Ready to Kill, is Andrew Peterson’s latest contribution to the action-packed world of military-style thriller fiction. His oft-described “wildly popular series” follows the life and career of Nathan McBride as he effectively navigates the trickiest and deadliest of scenarios. If you are a thriller fiction fanatic (then you probably already knew this book was out and had it pre-ordered awhile ago), do not miss Andrew Peteron’s Ready to Kill, out now and available from major bookstores everywhere. For those of you who appreciate thriller style fiction but have yet to read Peterson’s best-selling work, it would behoove you to start from the beginning of the series, but Ready to Kill will make an excellent addition to your collection. For more details, check this out: http://www.andrewpeterson.com/

Readers Entertainmenthttp://dayagency.com
Previous articleNathan McBride, ex-Marine Sniper, Is About to Face His Personal Demons
Next articleThe Webby’s Are Here!