Yes, Book Expo America is the largest professional event for publishing in America and there’s a lot of serious workshops, meeting, displays and conversations going on throughout the event, but there’s a fun side to the convention that is as appealing to attendees as learning or having a booth. 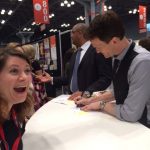 This year the big celebrity everyone was standing in line to see was, no not Grumpy Cat, but Neil Patrick Harris.  The actor-turned-author was personable and charming, giving each person who stood in line for over an hour to see him a real moment of his time as he made eye contact with each person and was sure to have some kind of conversation before they walked away, leaving fans thrilled and maybe a little more in love with this amazing actor.

Many of the booths this year went out of their way to have fun displays.  You could become part of the Simpson Family, hang out with superheros, wear fun dog ears or get your picture taken with a really creepy fox.

The potential for entertainment, fun, laughter and interesting photos were boundless! 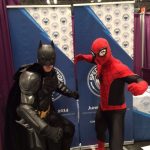 Authors and publishers got into the spirit of fun as well with fun giveaways and great attitudes!  Though there were many publishers with big booths and great books having fun and making attendees so happy to stop by, Reader’s Entertainment gave Macmillan/TorForge the “Best Spirit of BEA” award, which we made up just for them because they not only were giving attendees a great display, great books and a good time, but they were so obviously having a blast themselves!  The camaraderie and positive spirit there was infectious.  You couldn’t stop by without smiling because everyone was having such a great time!

The workshops were educational and informational, but there was some laughter going on as well.  The workshops entitled  “Worst. Social Media Advice. Ever.” was more of a social media mistakes roast and it was standing room only as mediator Ron Hogan questioned panelists Bill Barnes, Maureen Johnson and John Scalzi for their advice and got some of the worst social media advice given in the funniest, nearly-stand-up-comic way.  Bill Barnes even brought his mandolin and wrote a song about social media that caught on and brought John Scalzi in as the back up singer.  The entire workshop was tongue-in-cheek, laugh out loud funny.

The final day of the convention was open to the public and many readers, including entire classrooms full of children, attended.  Books and swag was given out and the energy was positive even as the convention center filled to numbers unexpected by many.

Whether you were looking to have a fun time in addition to displaying wears or becoming educated on the latest industry trends it was safe to say there was something for everyone at the 2014 BEA convention.