BOOK TRAILER: All Those Vanished Engines by Paul Park

A Princess of Roumania fantasy, with an extraordinary, intense, compressed SF novel in three parts, each set in its own alternate-history universe. The sections are all rooted in Virginia and the Battle of the Crater, and are also grounded in the real history of the Park family, from differing points of view.

The first section is set in the aftermath of the Civil War, in a world in which the Queen of the North has negotiated a two-nation settlement. The second, taking place in northwestern Massachusetts, investigates a secret project during World War II, in a time somewhat like the present. The third is set in the near-future United States, with aliens from history.

The cumulative effect is awesome. There hasn’t been a three part novel this ambitious in science fiction since Gene Wolfe’s classic The Fifth Head of Cerberus. Find out more at http://us.macmillan.com/allthosevanishedengines/PaulPark 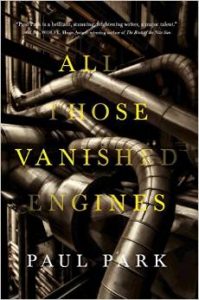 Paul Park is an American science fiction and fantasy author born in 1954. His first novel, Soldiers of Paradise, was published in 1987; his next two novels,Sugar Rain (1989) and The Cult of Loving Kindness (1991) share the same setting, a world on which the seasons last for generations. His most recent novels are a sequence set in a Ruritanian-flavored parallel world where magic works: A Princess of Roumania (2005), The Tourmaline (2006), The White Tyger (2007), and The Hidden World (2008).