Behind the Veil in Saudi Arabia

When I first traveled to Saudi Arabia in 1978 to live and work in the desert kingdom for twelve years, never in my wildest dreams did I believe that I would one day meet a high-ranking princess in the royal family, and that I would be the author to write the story of her life, or that my books on her life would reach women all over the world. 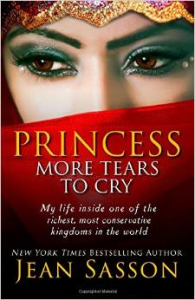 Mine was an unusual journey, so I’ll take you from the beginning and share with you how it was that reading changed my life and led me to seek adventure in an exotic desert kingdom.

There’s nothing quite like reading to transform a person’s life. I was an avid reader from childhood, and every book I read increased my curiosity about the world beyond my small southern town of only 800 people. So when the opportunity came to live and work in Riyadh, Saudi Arabia, I didn’t hesitate.  At that time little was known about Saudi Arabia, and there were very few Americans living in that mysterious kingdom, so I felt I was in a unique position to observe life in this country so secretive with the rest of the world.

I arrived in Saudi Arabia in September, 1978, several years before the oil wealth began to seriously modernize the infrastructure of the country. The Riyadh airport seemed ancient to my eyes. The old souk was the place where citizens and visitors shopped; the few food markets were bleak, with eggs and other perishables spoiling in the broiling desert sun. Beheadings were still held at the city center, soon known as “chop-chop” square to westerners.

While some Saudis still lived in mud huts, there were a few exceptions to the old structures. The flourishing oil wealth was evident in the extravagant palaces being constructed hurriedly by the royal family. The King Faisal Specialist Hospital and Research Centre was another example of what the newfound wealth provided. The opulent hospital, a pet project of King Faisal, who, unfortunately, did not live to see the opening of the grand institution as his nephew assassinated him three years prior to my arrival, was a showplace. Every conceivable amenity was available for patients and employees alike.  I can truthfully say that the royal hospital was the kingdom’s premier place to work, with comfortable dwellings for employees, food flown in daily from the United States for the hospital staff, and higher salaries paid to employees than in any other hospital in the entire country.

It was in this setting that I was soon meeting members of the Saudi royal family. My original job was  in medical affairs, and before long I found myself working directly for the head of the hospital, Dr. Nizar Feteih, who was the delight of the royal family. His father had worked for the first king, and when the child Nizar’s high intelligence was noted, he was sent to school in England and the United States, where he obtained his medical degree. Soon I discovered that he was King Khalid’s cardiologist and that the king and Crown Prince Fahd (who would one day be king) had a special affection for Dr. Feteih. This connection meant that I personally met both men, who were very kind to me, a visitor in their land.

After meeting a number of royals, I believed I was fully prepared to interact with any of the royal family. But I was in for a big surprise when five years after my arrival, I met Princess Sultana, the most exceptional royal I was to meet during my many years in the kingdom. The occasion of our meeting was an Italian embassy function. Although few royal women accompanied their husbands to such gatherings, Princess Sultana was no ordinary woman. Princess Sultana, I soon learned, was of the higher ranking royals, as her father was a son of the first king. She was highly confident, outspoken and very beautiful. She was also extremely wealthy in her own right, although she had married Kareem Al-Saud, a prince whose riches nearly equaled her own.

The big revelation came soon after our introduction, when this remarkable princess began to criticize her government, a royal regime controlled almost entirely by her relatives, the men in the royal family. In my five years of interacting with royals, Princess Sultana was the first who was so bold as to verbally censure a royal family known to severely punish those who dared to speak out against brutal injustices.

I instantly admired this princess, and when she mentioned she would like for me to attend a royal wedding, or a royal party at her palace, I was open to the invitation.

Although our friendship did not instantly forge, with only a few brief visits over the following year, after we met in Monte Carlo, our friendship strengthened. By this time I was married to Peter Sasson, a British citizen who was an international man, speaking six languages and accustomed to extensive European travel. When the princess discovered that Peter and I spent every September in Monte Carlo, she was thrilled to tell me that was the month her husband took his family to the south of France, and where they often moored their king-sized yacht. The princess thought we might connect in Monte Carlo. And so we did. In the kingdom there is abundant condemnation of every female, generally by other females, no matter who she is, or what she might be doing. In our home country, keeping everything aside from the normal secret is of upmost importance for women. Therefore, while the princess and I were out of the kingdom, in Monte Carlo, our friendship more easily flourished, for there was no concern regarding who might see us.

Over the years I came to know Princess Sultana as a woman of enormous bravery and strength. She had suffered mightily in her youth, as her father and brother were tyrants who appeared to enjoy harassing the young princess, the only female in the large family of daughters who dared speak out against discrimination of women. After coming to know me well, and to learn of my great love of books, and my ability to write, she pressed for me to tell the world about the difficult lives of Saudi women, even a Saudi princess. The princess wanted her story told, and she wanted me to tell it.

Hesitant in the beginning, for Saudi Arabia had been good to me, and I did not wish to offend all those I had befriended, I eventually came to share her view. I told myself that no other princess would dare consider such a thing, and that if her story was not told, the brutalities inflicted upon Saudi women would go unknown and unnoticed. By the time I agreed to write her story, I had left the kingdom. I had also written the bestselling book, The Rape of Kuwait, about the cruelties inflicted on the ordinary Kuwaitis by members of the Iraqi military, during Iraq’s occupation of that country.

And so the princess and I collaborated, with secret meetings, and numerous plots for her identity to be confidential, as we both knew that her father and her brother would make her pay dearly for such a breach.

The princess’ boldness and bravery was staggering. Although she felt great concern for the well-being of her small children, she was ready to personally face any force.

The difficulties did not end with the writing of the book, Princess Sultana: A True Story of Life Behind the Veil in Saudi Arabia, as only two publishers in the United States saw the value of her story, with most declaring that no readers would care about a Saudi princess. Many millions of copies of her story, told eventually in four editions, have sold, proving the error of those editors.

Today, more than twenty years after we first brought her story to the world, there are multitudes of fans of Princess Sultana, all appreciating her honesty, care and support of women world-wide. New readers are shocked to discover that women in Saudi Arabia all have male guardians, men who are responsible for making every decision affecting a woman’s life, from the moment of her birth, to the second she passes from this earth.  This means that unless a woman’s guardian gives his permission, a Saudi girl cannot attend school, cannot choose the man who will be her husband and cannot work at a job of her choice. All these decisions are the sole domain of the man who is her guardian. Saudi Arabia is still the only country in the world where women are not allowed to drive. The list of things a woman cannot do in Saudi Arabia is endless.  Perhaps this is why Sultana’s readers are just as forceful and caring as the princess and perhaps explains why they continue to support a fearless princess from the exotic kingdom of Saudi Arabia.

My latest book about Princess Sultana’s life, Princess, More Tears to Cry, is touching readers’ hearts, with so many writing to request that we continue this series, so that the world can know the truth of life for women behind the veil.

Until all girls and women in the world are free to live their lives without discrimination and abuse, Princess Sultana and I will not be silent, and we are grateful that readers continue to provide support and encouragement.

Find out more about Jean Sasson on her website at- www.JeanSasson.com.

You can purchase this and Jean’s other books on Amazon, BN, Kobo and where other books are sold.