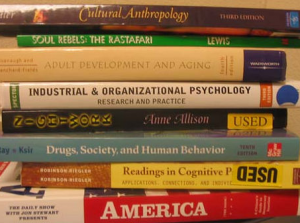 Although listing poor quality college textbooks is something of an objective exercise, there are five publications that actually stand out. Undoubtedly, there are many more. However, these five college textbook duds certainly represent a starting point in the search for books that should be eliminated from institutions of higher education. Hopefully none of your professors this year will make the mistake of using any of these outdated texts.

Guide to Culturally Competent Healthcare
Although the book does appear to convey some basic information in a fairly accurate manner, it is riddled with bigoted statements. Indeed, some would argue that the book is beyond a debate over political correctness, and is completely inappropriate. For example, the book includes this gem: “Do not make jokes about the Holocaust … if Jews are present.”

Fearon’s Biology
Although the Guide to Culturally Competent Healthcare does seem to have some accurate factual information, it is challenging to make the same claim about Fearon’s Biology. The author and editors of the text seem quite confused about who Mary Shelley was, and what she did in life. She wrote the iconic horror tale Frankenstein … as a teenager. She was not a medical professional or researcher. Nonetheless, the folks behind Fearon’s Biology write that the Frankenstein monster was an actual creation.

Life Science
A publication of Bob Jones University Press, this piece of work includes a section contending that dragons were real. The book goes on to note that they had special glands in their skulls that stored a chemical used for fire … when the creatures breathed fire. There is no scientific evidence whatsoever that fire breathing dragons existed. The book also begs another question to the publisher. Bob Jones University tends to take the position the Earth is only a matter of 5,000 to 6,000 years old. It is unclear when these fire breathing creatures occupied space on the planet then.

Lifetime Health
In this book, the author presents a section on protection from sexually transmitted diseases. No mention is made of condoms, considered the second best way to protect against STDs (after abstinence). In place of condoms, the author recommends getting plenty of rest “to make wise decisions”.

Creating America
A basic American history text that gets a good deal right and then wrong. The book oddly contradicts itself. For example, in regard to the War of 1812, in one section it has the Americans winning the war, in another the British. In reality, the war was stopped via a treaty with no actual victor.

Textbooks are important for providing information to students in college, high, and middle school. They shape our students studies and when they give out inaccurate information, it’s hard to justify their continued use. Hopefully students everywhere, whether they’re working on a NJIT masters in Civil Engineering, or just going into high school, will be able to tell the difference between a good textbook and a dud.

About Brooke:
Brooke Chaplan is a freelance blogger and recent graduate of the University of New Mexico. She now lives in Los Lunas where she writes and researches when she’s not outside running, hiking and biking. Contact Brooke on LinkedIn.

Readers Entertainmenthttp://dayagency.com
Previous articleeBook Use Up 33% in 2014 in Libraries through OverDrive
Next articleSTAGES OF DESIRE a New Historical From JULIA TAGAN