STAGES OF DESIRE a New Historical From JULIA TAGAN 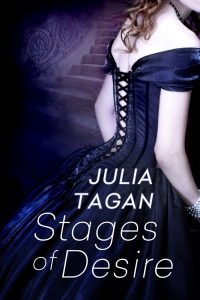 Stages of Desire by Julia Tagan

To be or not to be — in love . . .
As a ward of the Duchess of Dorset, Harriet can hardly expect more from a match than the ringing endorsement of “from what I’ve heard, the man is financially secure and his teeth are quite regular.” After all, she’s only the lowly daughter of traveling actors, not the actual daughter of the duchess.

William Talbot, Earl of Abingdon is set to marry the duchess’s daughter. After his elder brother’s scandalous death, his family’s reputation is paramount, and he’ll allow nothing to damage it again. But when Harriet disappears to save her father from debtor’s prison, the scandal threatens William and his intended’s family.

The simple task of fetching the duchess’s runaway ward turns complicated when Harriet insists on traveling with her father’s acting company. William’s forced to tag along, and finds himself entranced. The stage transforms Harriet into a free-spirited, captivating beauty. But someone’s been sabotaging the theater company, and instead of facing scandal, William and Harriet discover a threat not only to their growing passion, but to their lives…

“Miss Farley. I would like an answer to my question.”

She leaped down from the wagon, landing as lightly as a cat. Her back was ramrod straight as she approached William, and she met his eyes with an unwavering gaze. “I presume Her Grace sent you to talk sense into me.”

“Well, you’re too late. We’re preparing for a journey to Birmingham. These are the Farley Players, the esteemed strolling theatrical company you may have heard me mention the other day.”

Esteemed seemed far too grand a word for this shabby group.

“I’d like a word with you.” He motioned to the door. “Alone. Outside.”

She led the way out of the barn to a small creek, knelt down, and washed her hands, drying them off on her skirt. William couldn’t help but notice the flash of petticoats when she did so, as well as a view of her slender ankle. The sight of her was disconcerting. He cleared his throat in an effort to regain his composure.

“If I remember correctly, Miss Farley, the duchess and I both forbade you from leaving London.”

She pushed her hair off her face with an irritated gesture. “I’m of age now, and am free to do as I please.”

Her arrogance was astounding. He wished he could grab her by the shoulders and give her a good shake. “You would run off with these troublemakers and shame the woman who raised you, as well as the woman I am going to marry? Is your father near death?”

“Not exactly.” He’d struck a chord; she didn’t appear as sure of herself anymore. “I don’t mean to do anything to harm Her Grace. She’s been like a mother to me. But she’s not my true mother and, at this moment, I must see my father.”

“What will happen to him if you don’t charge up to Birmingham with your army in tow?”

“He’ll be sent to debtor’s prison.”

“I’m deadly serious about this and find your humor most unkind.”

Relief surged through him. “I am sorry, Miss Farley. I didn’t realize how simple the solution is. I’ll give you the money. Have one of your troupe bring it to your father, and you and I will return to London. I understand why you wouldn’t want to trouble the duchess with this kind of request, but as I have certain plans with regard to the family, I’m happy to extend you this favor.”

“You’re doing me a favor?” She fixed him with a stare. “I’m not some poor relation of yours to order about. I won’t take your money.”

The girl was stubborn when there was no need to be. How had the duchess ever put up with her in the first place? “Take the money and let’s get going. We’ll stay overnight at my estate and have you back in London by tomorrow afternoon.”

“It won’t do. The producer to whom my father is indebted demands a production within the week.” She shook her head. “I know this seems like a rash act. But I need to take care of my father right now. I’m fully capable of comporting myself in a ladylike manner. I have no intention of bringing shame upon Her Grace’s household.”

“So just now, when you were heaving trunks around like a common dockworker, it wasn’t scandalous?” An uncomfortable warmth swept over him, remembering it.

“That was work. Nothing scandalous about work.”

“It was the way you were working.”

“And what way is that?” She put her hands on her hips and breathed heavily. He couldn’t help noticing the rise and fall of her chest.

At a loss for words, he stammered as he tried to regain the upper hand. “Never mind now.”

She looked up at him, her eyes wide. “My lord, I understand why you might be worried, and why my running off alone was not proper. I’m sorry. Allow me to go to Birmingham and sort out this mess. I haven’t seen my father in a long time. My mother died when I was born and life has been rough.”

“My mother died giving birth to my younger brother. But you must carry on. Life is not meant to be easy.”

“There are varying degrees of easy. Losing a mother, yes, we’re even on that point. But have you gone for days slogging through the mud in the hopes of finding a warm bed and supper? I remember quite clearly what it’s like to not eat for a couple of days, the way the hunger climbs from your stomach up your throat until even your jaw aches.”

She had him there. He only missed a meal by accident, when he was absorbed in his research. And any cravings were satisfied immediately.

“My lord, I’d like to thank my father for allowing me to live with the duke and duchess. It’s the least I can do.”

He almost suggested she write a letter instead, but stopped himself. What if he were given the opportunity to talk to his father, or his brother, again? What would he say?

He understood her desire to make amends, and her honesty cut him to the core.

About the Author:
Julia Tagan lives with her husband and goldendoodle in New York City. A journalist by training, she enjoys weaving actual events and notorious individuals into her historical romances. Her favorite activities include walking her dog in Central Park, scouring farmers’ markets for the perfect tomato, and traveling to foreign cities in search of inspiration.