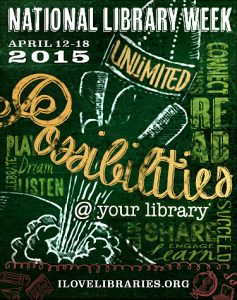 It’s National Library Week 2015. The American Library Association, and you local library have many amazing events scheduled this week. Check out the ALA’s press release and links!

National Library Week (April 12 – 18, 2015) is a time to celebrate the contributions of our nation’s libraries and library workers and to promote library use and support. From free access to books and online resources for families to library business centers that help support entrepreneurship and retraining, libraries offer opportunity to all. The theme for 2015 National Library Week is “Unlimited Possibilities @ your library.”

First sponsored in 1958, National Library Week is a national observance sponsored by the American Library Association (ALA) and libraries across the country each April. It is a time to celebrate the contributions of our nation’s libraries and librarians and to promote library use and support. All types of libraries – school, public, academic and special – participate.

Best-selling author David Baldacci will serve as Honorary Chair of National Library Week 2015 (April 12-18, 2015). Baldacci’s novels have been translated into more than 45 languages and have been adapted for film and television. Over 110 million copies of his books are in print worldwide.  In addition, Baldacci is involved with several philanthropic organizations, including his family’s Wish You Well Foundation®, which fosters and promotes the development and expansion of literacy and educational programs.

Readers Entertainmenthttp://dayagency.com
Previous article5 Ways to Find a Great Book That is Worth Your Time
Next articleSNEAK PEEK: In High Cotton by Bestselling Authors Nancy Naigle and Kelsey Browning