A reader once asked me…

“How long does it take to publish a book?”

For me when I recently published Cross Examinations, a collection of short private eye stories, the answer was all the above.

I wrote the first draft back in 1988, which is still today the setting for the tales. Not long after, I encountered a series of personal needs involving my family and friends and found it best to put the manuscript into a drawer and build a career that assured us all a steady income. It all worked out beautifully, because about 27 years later with a career completed and three children grown, I was nearing retirement and it was time to reopen that drawer.

Thus in 2012, I entered a whole new world of electronic publishing. The book went through a rewrite, along with several other manuscripts. And I began writing daily again and created another book; a novel, this time.

After approximately three months of searching, I found a publisher for the novel. Ah, but then I was faced with the prospect of another 8 to 10 months wait while the editing and publishing process advanced. That seemed like forever.

I wanted to do something progressive in the meantime. So, having heard about this thing called self-publishing, I decided to give it a try with the short story collection while I waited for the other book, the novel, to come out.

Again, I worked through three weeks of rewrites and polishes to create the content of Cross Examinations.

But then came the daunting task of learning to properly format and post an eBook. After another three days of poking around, reading up, and watching various videos, I pressed the Send button and launched my book into the world.

Ah, but then… came the agonizing three hours wait before the book became fully available on the website.

Finally, success was mine!

The collection of short stories is out there now available to a wide audience and the other book, the novel, is still moving forward through the production process for full publication this fall.

So, as you can see, the process contains many stages, but at each step along the way, I knew I was getting closer to the fulfillment of my dream.

Looking back, it doesn’t seem to have been all that long, after all.  I’m happy I took the time and fully intend to share another again soon.  And this time, it shouldn’t take so long.

So please believe me when I say, thanks for reading.

Readers Entertainmenthttp://dayagency.com
Previous articleWant to Be More Intellectual? 5 Books to Read this Year that Will Ignite Your Inner Scholar
Next articleSneak Peek: Trust and Consent by Megan Slayer 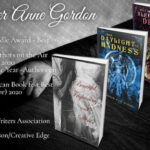 Jocie McKade - 29 April 2021 0
For The Love of Comics by Jennifer Anne Gordon There is a place between a dreams and reality where comics have always landed for me....