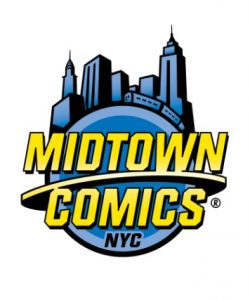 From exclusive apparel to must-have variant covers, Midtown Comics will have plenty of goodies to offer at booth #2036 during this year’s NYCC. Midtown has SIX variant comic book covers, SIX exclusive t-shirts, and exclusive Batman v Superman: Dawn of Justice caps. We’ll also have 20% off ALL comics and graphic novels, as well as a photo op with Captain America’s iconic shield and Thor’s mighty hammer Mjolnir!

Look for six exclusive t-shirts, featuring the hottest characters in comics! Spider-Gwen, the new hero everyone loves, graces our t-shirt with art by J. Scott Campbell, and Aleksi Briclot provides a menacing rendition of Ultron, both shirts from Mad Engine. For DC fans, we have FOUR Batman v Superman shirts from Graphitti Designs, each bearing the logo of one of these iconic heroes: Batman, Superman, Wonder Woman, and the BvS combo logo!

New Era has provided us with exclusive caps that should help ease the wait until Batman v Superman opens in theaters! We’ll have three snapback caps, each featuring the logo of Batman, Superman, or Wonder Woman!

As if all that wasn’t enough, Midtown Comics will provide photo ops, trivia contests, and free giveaways throughout the entire convention! Keep your eyes on Midtown’s social media pages for updates and chances to win!

MIDTOWN COMICS opened its first store in 1997, and is now the industry’s leading retailer of comic books, graphic novels, and manga, with its online store as well as three landmark NYC locations in Times Square, Grand Central and Downtown, and a comics boutique at Toys R us. Follow us on Facebook, Twitter, Tumblr, and the Midtown blog! More information available online at:  http://www.midtowncomics.com