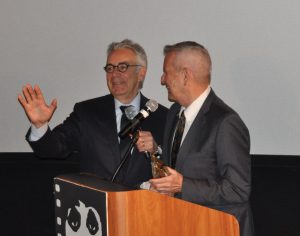 On October 18, 2015, Howard Shore celebrated his 69th birthday inside the AMC Theater in Chicago, Illinois, listening to a studio audience of fans sing an off-key version of Happy Birthday To You. Shore was being given an award at the 51st Chicago International Film Festival, and the Canadian composer (Shore was born in Toronto, Canada)—winner of 3 Oscars, 3 Golden Globe awards and 4 Grammies—shared many stories of his collaborations with such great directors as Martin Scorsese (5 films) and David Cronenberg (all but one of Cronenberg’s films). [*See the Filmography at the end of the article.]

As Shore told it, he had admired David Cronenberg’s dark films from the age of 14, but didn’t get up the courage to ask if he could do the music for one of Cronenberg’s horror films until the age of 28 in 1978, after completing his training at the Berklee College of Music in Boston, (where he is now on the board.)

Shore described how he selected a clarinet housed in a shoebox as his first musical instrument at the age of 8, saying, “The clarinet seemed pretty hip for a 10-year-old.” He began writing musical harmony with a pencil (which he said he still does today) and training in harmony and counterpoint from an early age, thanks to an early teacher Morris Weinstein, and the CBC (Canadian Broadcasting Corporation), a government institution, welcomed him and gave him an early start. Shore says the government tested the hearing of all young children. When his hearing was found to be excellent, they encouraged him to become a musician. He reminisced, “I was a kid in a room with a tape recorder listening to a lot of good music.” Shore acknowledged that his life has been one of capitalizing on opportunities that came his way as they came his way.

A chance meeting at summer camp with another future prominent Canadian, Lorne Michaels, creator of “Saturday Night Live,” would lead Shore to do summer camp productions of plays like “West Side Story” as well as a show called The Fast Show with Michaels, and, ultimately, to perform onstage with the original “Saturday Night Live” greats gathered from such diverse cities as Detroit (Gilda Radner), Los Angeles’ Groundlings troupe, and Chicago’s own Second City. Shore would do 103 live episodes of “Saturday Night Live” between 1975 and 1980, even appearing as a beekeeper in a Belushi skit. He gave John Belushi and Dan Ackroyd their nickname “The Blues Brothers.”

In the Q&A following the showing of clips from his many film triumphs, Shore spoke about his illustrious career.

Q1:  Was collaboration stimulating for you, or was it just a means to an end?

A1:   I was used to writing and acting with other people.  Working in film is really working in the theater, but you’re till the lonely kid in the room. It sort of combined everything I liked.

A2:  I met Lorne Michaels in summer camp in Canada.  We used to do summer camp productions and we did some collaborating at the CBC. Then, a few of us ended up in New York City putting on this show. I didn’t give up my home in Canada, at first. I don’t think I really thought I could make a living at this or at putting music in film, or that “Saturday Night Live” would last, but I was always interested in working with strings and orchestras. I think I worked for 10 years before it occurred to me that I might be able to make a living at this. In 1986, after I had done “After Hours,” “Big” and “The Fly,” Scorsese knew Cronenberg and, from word-of-mouth, I got the job of doing the music for “The Aviator,” which was set when silent films were giving way to sound.  There was a certain sound then. I was doing concerts of “Lord of the Rings” with a symphony in Belgium and that West German sound was good for “The Aviator,” which used percussion and castanets—the castanets because of the Hispanic influence in Los Angeles.  Marty was using Bach, also.

Q3:  Working with Scorsese was another big collaboration of your life. How was that?

A3:  Marty doesn’t like to watch his films with temporary music inserted, as some directors do, or any music inserted that doesn’t belong.  David Cronenberg is very similar. What Marty does that I love is that he collects sounds, from a jukebox playing in a scene, etc. I’ll collect them and slowly build from that material. For “Hugo,” a couple of sounds per month were collected. I’ve never seen a director do that as well as Scorsese. But Peter Jackson (“Lord of the Rings”) works completely differently. Marty doesn’t want to give anything away with the music, but Peter wants to reveal and have it out front in his films.

Q4:  Tell us about your music for “The Silence of the Lambs”?

A4:  In “Silence of the Lambs” the music moves in very claustrophobically. Spooky sounds near the end. Heavy breathing when Clarice is in the basement in the dark. Muted somber tones.  Jonathan Demme directed that film and he said to me, “Suppose we take the point-of-view of Clarice?” You could have written the music for Hannibal Lecter, but the score wasn’t created that way.  Early nineties opera was really influencing me at the time—Verdi, Puccini. Now you see a lot of films being done this way.  I did it in 1986 for “The Fly,” but I had difficulty with the producers—never with Cronenberg—but when the movie was a hit, the producers were going, “Oh, right.” Up until “The Fly” I hadn’t really had full London Philharmonic type sound access. All of that later developed into “The Fellowship of the Ring” music.  I used to set up all of my recordings the way the New York Metropolitan did, splitting the violinists, the cellos over here, bass over there. Most movies at that time weren’t being done that way.  This score was interesting, because depending on how the orchestra was playing that day, I’d adjust.  It even led to things like the film “Crash” and the techniques in that 1995 film sort of led to surround sound.

Film music is a perspective.  You could take any scene and do it 7 or 8 different ways.  David Cronenberg wants his music to be more ambiguous.  He doesn’t want to tell the audience anything up front, but Peter Jackson wants it the opposite with everything in the center.  He wants clarity.

Q5:  Tell us about your work for the movie “Seven.”

A5:   With the movie “Seven,” directed by David Fincher—who is a great director— I was going with electronics, ocean sounds, underwater things, whereas the music in “Silence of the Lambs” always sounds a little unsettling and disturbing.

Q6:  What about your score for the Johnny Depp movie “Ed Wood,” directed by Tim Burton?

A6:  That was set in a great period for music—the late fifties .  Jazz. Cuban music.  Mancini scores. They were all coming in.  It was a very rich period for music and the theramin instrument was being used. It’s the only instrument that you don’t touch.  It was created as a classical instrument.  Working with Tim Burton was a great project, a lot of fun. You couldn’t really do anything wrong in his world.

Q7:  What about Cronenberg’s “Crash”?

A7:  I did “M Butterfly” right before “Crash” with 2 harps…actually 3 harps: left, center and right.  I added 6 electric guitars, so it became sort of a live ensemble. Then, I added 3 woodwinds and then metal percussionists, playing into the idea of machines and their fetishistic relationships to people. (“Crash” was David Cronenberg’s 1995 film.)  It produces a sound that’s hypnotic and dangerously inviting.

Q8:  How was collaborating with Scorsese on “Hugo,” for which you received your 4th Oscar nomination?

A8:  Collaborating with Marty again felt the same.  This was Scorsese’s first 3D picture and the films of Michael Powell influenced his approach. Powell is widely regarded as a British filmmaker who should perhaps be considered up there with Hitchcock, but his controversial 1960 film “Peeping Tom” made it nearly impossible for him to work again. His career went off the rails, but he was married to Thelma Schoonover, Scorsese’s long-time film editor, from May 15 of 1984 until his death in February of 1990, so there was that influence in “Hugo.” The entire movie is really a love affair: a movie about making movies.

Q9:  What about “Lord of the Rings?” How much music did those films require? How long did those scores take?

A9:  “The Fellowship of the Rings” project was like scoring 4 films.  The extended version would be 5.  It is eleven and one-half hours of original scoring for film and it took me 4 years writing the music. It was a great project and came to me with great timing. It had a lot of good strokes for me. It all came together for me, as a composer.  I was trying to put Peter Jackson’s images into music. [*Note:  Since 2004, Shore has toured the world conducting local orchestras in performances of his new symphonic arrangement of his highly acclaimed “Lord of the Rings” scores, a new work entitled “The Lord of the Rings:  Symphony in Six Movements.”]