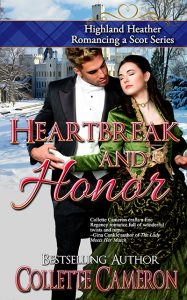 Heartbreak and Honor by Collette Cameron

Abducted by a band of renegade Scots, Highland gypsy Tasara Faas blackens her rescuer’s eye when the charming duke attempts to steal a kiss. Afterward, Tasara learns she’s the long-lost heiress Alexandra Atterberry and is expected to take her place among the elite society she’s always disdained.

Lucan, the Duke of Harcourt, promised his gravely ill mother he’d procure a wife by Christmastide, but intrigued by the feisty lass he saved in Scotland, he finds the haut ton ladies lacking. Spying Alexa at a London ball, he impulsively decides to make the knife-wielding gypsy his bride despite her aversion to him and her determination to return to the Highlands.

The adversary responsible for Alexa’s disappearance as a toddler still covets her fortune and joins forces with Harcourt’s arch nemesis. Amidst a series of suspicious misfortunes, Lucan endeavors to win Alexa’s love and expose the conspirators but only succeeds in reaffirming Alexa’s belief that she is inadequate to become his duchess.

“Miss Atterberry, you’ve drawn the attention of several theater-goers.” Smiling and occasionally waving, the dowager inclined her neatly coiffed silver head toward the other stalls. The turquoise ostrich feather atop her head dipped and bobbed with her exaggerated movements, as did her spectacular diamond earrings.

“Those Hinton windbags are sharing that cow Clutterbuck’s box.” She inclined her head and gave a little finger wave their way. “Yes, I’m talking about you, too, you pernicious chinwags.”

Suppressing a giggle, Alexa set the opera glasses to her eyes and instantly regretted the impulse when she encountered a myriad of attendees pointing their attention in the direction of Lucan’s box.

Mr. Morton waved exuberantly, earning him a glower and the smack of her fan from the lady beside him.

Lucan edged closer to Alexa and lifted her hand. He kissed the back for a lingering moment. Given the surge in whispers nippily following his kiss, several sets of theater glasses likely dipped to focus upon their hands.

“Please, please, marry me, Kitten,” Lucan whispered in her ear.

Alexa swung round to admonish him, but her mouth dropped open at the heat radiating from his granite eyes.

If I were tinder, I’d burst into flames.

The scorching temperature permeating her was hot enough to incinerate. She flipped her fan open. Heaven above, what this man did to her . . .

He lowered his lashes partway, a seductive smile teasing one side of his too-tempting mouth, the blasted dimple in his cheek mesmerizing her. “Smile and nod, then give me a look of besotted adoration. You may flutter your eyelashes and giggle to make your infatuation more believable if you wish.”

“Foolish man, I’ll do no such thing.” Alexa chuckled, the tension easing from her.

“No.” She released another tense laugh. “Have you always been this obstinate or do you not understand the word?”

Hadn’t she thought the same thing about him when they’d first met? Only now, she found his pigheadedness charming and amusing.

He winked and set her hand upon his sculpted thigh, holding it there by placing his hand atop hers. “My ploy worked, didn’t it? Aren’t you more relaxed now?”

The dowager nudged Alexa with her fan.

Alexa tried to ease her hand free, but Lucan firmly pressed her palm into his leg, giving a brief squeeze and another wicked flash of white teeth.

At this rate, she might be the one to ravish him. She clenched her teeth against the desire to trail her fingertips along the muscle.

Surveying the audience, he patted her hand as if he knew perfectly well how he affected her.

The earlier cacophony filling the auditorium filtered to a muted buzz as the lighting dimmed in preparation for the performance.

Dowager Lady Middleton all but bellowed into the stillness, “Tell me, my dear, why on earth did you refuse my nephew’s proposals?”

Bestselling, award-winning Historical Romance Author, Collette Cameron, pens Scottish and Regency Romances featuring rogues, rapscallions, rakes, and the intrepid damsels who reform them. Mother to three and self-proclaimed Cadbury chocoholic, she’s crazy about dachshunds, cobalt blue, and makes her home in Oregon with her husband and five mini-dachshunds. You’ll always find animals, quirky—sometimes naughty—humor, and a dash of inspiration in her novels.

Her award-winning Castle Brides Series, Highland Heather Romancing a Scot Series, and Conundrums of the Misses Culpeppers Series, as well as her other books, are all available on Amazon and other major retailers.

To learn more about her books or to connect with Collette, visit her website: collettecameron.com and at: