SNEAK PEEK: Murder at the Mansion by Janet Finsilver 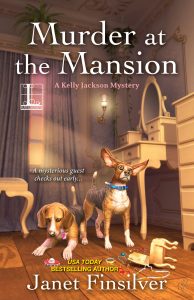 Kelly Jackson returns to California to manage Redwood Cove Bed and Breakfast. While the inn is being renovated, she is assigned the task of inventorying a historic collection of objects from the 1800s housed at nearby Redwood Heights and to assist at the mansion during the Whale Frolic Festival. She’s also asked to learn what she can about the disappearance of some jewelry from visitors’ rooms.

Shortly after she arrives, Kelly finds a guest stabbed in one of the rooms, the door and windows locked from the inside. Then Gertrude “Gertie” Plumber, a member of the Silver Sentinels, a crime-solving group of senior citizens, is attacked. The police question Gertie’s son, Stevie, who is working at the mansion with his bed-bug and termite-sniffing team of beagles, Jack and Jill, about the jewelry thefts as well as the murder. Kelly and the Silver Sentinels must work together to solve the crimes before another life is lost and Stevie is put in prison.

Looking at my watch, I saw it was time to move. I unpacked the heavy company fleece and the lightweight nylon jacket Corrigan had sent with the cardholder. They had Redwood Cove Bed-and-Breakfast embossed underneath Resorts International. A glance outside showed fog beginning to swirl in. I chose the fleece.

I joined Helen in the main room.

“Sure. What can I help you with?” Two boxes were on the counter, containing stacks of plastic-wrapped trays full of appetizers.

Through the back door window, I saw Daniel’s bus roll into the backyard.

Helen pointed to a box. “Grab that one.”

I could almost hear my red hair beginning to curl in the foggy air as I walked outside. I got in the middle bench seat and placed the hors d’oeuvres on my lap.

Redwood Heights was only a short distance from the Redwood Cove Bed-and-Breakfast. A block from the inn, we took a left turn down a hill and went around a corner, and there it was.

I gasped. The building sat nestled among giant redwoods. It was two stories with row after row of windows interspersed with French doors leading to balconies protected by black wrought-iron railings. A master craftsman had twisted them into intricate twirls and patterns, same as the ones encircling the top of the building. The mansion reminded me of a majestic English queen, the towering trees her staff-in-waiting, her billowing skirts the outcropping of buildings spreading to either side, her crown the widow’s walk on top.

This answered one question—what Daniel and Helen had meant when they said this property was different. It definitely wasn’t like any other Resorts International properties I knew. The ones I’d experienced and the ones I’d read about had a more casual air to them.

We pulled into the back and unloaded. Helen busied herself in the kitchen, heating the appetizers.

“I get them ready, then the staff minds them and adds as necessary to the hot trays in the parlor,” she explained.

“The guest area is this way.” Daniel pointed to a hallway.

We walked into a room filled with guests and over to the sideboard holding the evening’s offerings.

Large crystal chandeliers lit the room. Tables were covered with white brocade tablecloths. A stack of fine china plates sat next to an array of artisan cheeses and several wine choices.

I looked around the room. Lustrous pearls rested on cashmere sweaters. The diamond on one woman’s hand competed in size with the crystal finial hanging from the center of the chandelier. The gentle orchestral strains of “Moon River” accompanied the conversation in the room.

These weren’t the fleece-and-denim Redwood Cove visitors I had gotten to know. I straightened my jacket and ran my hand through my fog-frizzed hair.

A young woman offered some of Helen’s appetizers to a guest. As she reached for one, a shrill scream ripped through the room, shattering the tranquil moment. 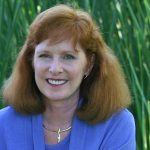 Janet Finsilver is the USA TODAY best-selling author of the Kelly Jackson mystery series. She worked in education for many years as a teacher, a program administrator, and a workshop presenter. Janet majored in English and earned a Master’s Degree in Education. She loves animals and has two dogs—Kylie and Ellie. Janet has ridden western style since she was a child and was a member of the National Ski Patrol. One of the highlights of her life was touching whales in the San Ignacio Lagoon. Murder at Redwood Cove, her debut mystery, was released on October 13, 2015. Her second book, Murder at the Mansion, is scheduled to be available on June 7, 2016.