Frozen to Become a Book Series 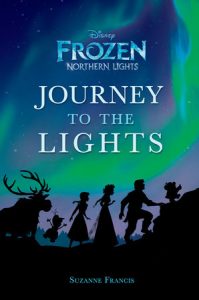 The ultra-popular Disney movie Frozen, has inspired a book series. Random House has just published the first book in the series; Journey to the Lights by Suzanne Francis. This first of ten planned books in the series takes the characters everyone knows from the movie, and sends them on a ” mission to recover the glimmer of the Northern Lights.”

Here’s more from the press release: “The story titled, Disney Frozen Northern Lights: Journey to the Lights by Random House, will be introduced as a deluxe novelization in July ahead of an extended collection of books featuring the familiar characters fans know and love, as well as a brand new protagonist named, Little Rock.”

From the back cover:
Anna, Elsa, Kristoff and their friends from Disney Frozen are helping Little Rock the troll earn his tracking crystal. Join them as they embark on a mountain adventure under the Northern Lights! This special novelization features 8 pages of spectacular photos of the real Northern Lights in a beautiful jacketed hardcover format. It’s perfect for children ages 6 to 9!