Behind the Words: Author Monica Corwin 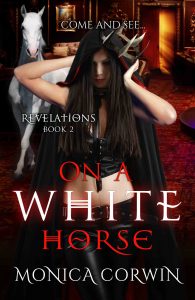 This week we welcome Monica Corwin.

Welcome Monica, tell us a bit about yourself. Where you’re from, where you live? Do you have one of those day-jobs?

Hi, thank you. I’m originally from Southern Ohio but I now live in North Central Ohio. But don’t feel too bad for me I did get out of Ohio for some time. I do have one of those day jobs. I analyze cybercrime trends for a private threat company. Sounds fun because it IS fun.

Oh man, I’ve been writing since I was a kid. First story I ever wrote was about murdering my sisters (I have three). I obviously wrote it because I wanted to impress and marry Edgar Allan Poe. It was a sad sad day when I learned he was already dead,

Um well I am a single mother, with a toddler, a day job, and I am working my bachelor’s degree online. So I don’t really have a writing day. More like five or ten minutes of chugging coffee and slinging words at a computer screen. There is most certainly always coffee involved.

My latest release is called On a White Horse. It’s the second book in a four book series about female horsemen of the apocalypse who decide not to the end the world and move to Earth.

They are always fictitious. I might borrow little things from people in real life like the color of a pair of shoes or the way they bite the sides of their fingernails when nervous.

Hm…One detail is Gwyn was never meant to happen. He wasn’t planned for nor plotted. He showed up one day and demanded into the story. This was a Nanowrimo novel from last year.

I have to say Arthur from my book King Takes Queen. I’ve loved him for years and always wanted to give him a happy ending. But I feared I’d mess it up when it came time to do it.

Eeek, good question…probably Cloris from my Revelations series. She is the horsemen of death and well the embodiment of death who escorts souls to the underworld. I think it would be an interesting experience.

I’m working on a box set with some fantastic authors as well as writing the second book in my Soul Program series.

Edgar Allan Poe of course so I could figure out how to bring him back to life and marry him. Or Jack Kerouac…

Did you ever want to give up and what made you keep going?

Well…I sing rather well. That surprises people who have met me since I’m a tad soft spoken. I also read incredibly fast, like 3-4 book a day fast.

How much does your readership influence what you write? Answer…SO MUCH. I write for myself but I also write for my readers. I’d love to hear what you think, want, need in my books.

Thank you so much for joining me today Monica and letting readers look behind your writing curtain!

Landing Page for On a White Horse: https://books.pronoun.com/on-a-white-horse/ 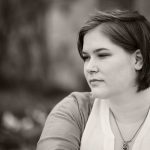 Monica Corwin is an outspoken writer who attempts to make romance accessible to everyone no matter their preferences. As a new Northern Ohioian Monica enjoys snow drifts, three seasons of weather, and a dislike of Michigan. When not writing Monica spends time with her daughter and her ever growing collection of tomes about King Arthur.

Reader’s Entertainment Magazine and Radio started over a decade ago. We have won awards both for the magazine and the radio podcast. We’ve featured...
Read more