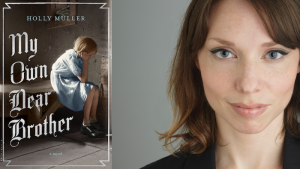 by Holly Müller
(reprinted with permission from Bookish.com)

Holly Müller’s debut novel, My Own Dear Brother, takes readers to Nazi-controlled Austria. Thirteen-year-old Ursula Hildesheim finds that the world around her is changing rapidly and in ways she never expected: Her closest friend has gone missing, her mother is having an affair, and—most disturbingly—her brother is supporting the Hitler Youth. Here, Müller shares her personal connection to World War II and the reason why she believes historical fiction writers keep returning to that dark period. 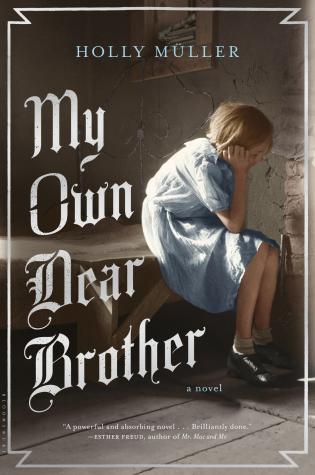 I am grandchild to both an Englishman who served as a military medic for the Allies and an anti-Semitic Austrian who took up arms to fight for the Nazis. As a child, like so many of my generation, my understanding of the Second World War was a simplistic “black hat versus white hat” story: binary, remote from me, and not very real. When I reached adulthood, I realized how little this told me about the complexity of the situation, and about the involvement of my two very different grandparents.

Writing World War II fiction was, for me, a means of looking more closely and understanding its nuances. I was drawn to the drama of conflict and peril—the ingredients of any good story—but I also wanted to zoom in to the human level, to find new entry points and perspectives, and to explore my decidedly uneasy feelings about my Austrian grandfather’s role in that terrifying regime.

I chose to write a book set in Nazi-controlled Austria at the end of World War II.  I don’t speak fluent German and the culture is relatively unknown to me, so I moved to Vienna to conduct research. There, I discovered a very different atmosphere from the celebratory triumphalism and camaraderie of the Allied account: There was shame, denial, taboo subject matter, and an overall reluctance to dwell on the country’s Nazi past.

Because of the highly charged nature of the topic, I was acutely aware of my responsibility to be both sensitive and unsentimentally honest in my portrayals. I based my book on real testimonies, both from my own family, the diaries of strangers, and the memories of elderly Austrians I interviewed. I attempted to convey the moral complexity of what I encountered: the ignorance and prejudice, the unbelievable cruelty, the complicity, the powerlessness, as well as the courageous resistance and personal suffering.

There is a reason World War II documentaries are perpetually played on TV, why historical fiction writers keep returning to that period, and why readers keep reading books about it. A historical event on such an enormous scale affects billions of lives and sends shock waves down through the generations. So many of us have our own personal stake in it; so many have a tragic or shame-filled family story like I do.

We understand the world through stories. Historical fiction is one way to broaden and deepen our perception of that tumultuous and devastating war, to challenge the overly simplistic narrative of goodie versus baddie, and to glimpse instead the messy, emotionally-driven, raw humanity. As George Eliot famously said “Art is the nearest thing to life,” and through art, I believe it’s possible to capture not necessarilyreality, but something that feels true.

Holly Müller is a writer and musician. She teaches Creative Writing at the University of South Wales and sings in the band Hail! The Planes. My Own Dear Brother is her first novel. Holly Müller lives in Cardiff.