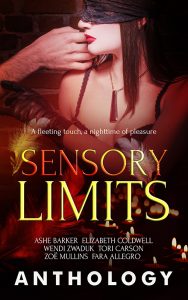 Yes or No by Ashe Barker

Be careful what you wish for… What’s your darkest fantasy? It can’t do any harm, can it? A bit of not-so-innocent private fun. No one need ever know…

There’s no harm in just filing in the form, is there? It’s only a bit of harmless escapism, a sexy fantasy. The advert is tempting, though.

Martha craves sensation. She yearns for intensity, for a touch to make her skin tingle and her nerve-endings sizzle, a caress to make her scream and demand her surrender. And that’s the problem. She’s a cautious soul and no pain slut. She’s not about to hand herself over to some ham-fisted Dom and trust to luck again.

So when she learns she is one of the winners who are to be offered the chance to play out the scene from her kinky imaginings to the letter, she can’t believe her luck. The only condition? The organisers reserve the right to select the Dom, one skilled in the specifics of Martha’s personal fantasy and the scene must be played out in public.

If she does everything he demands, this will be a vacation to remember.

Lily Jameson has always hated the idea of going on a cruise. As far as she’s concerned, they’re something you do when you’ve retired. So when her husband Daniel surprises her with tickets for a cruise down the River Seine, she isn’t impressed. What she doesn’t realize is that he’s planned the trip as an opportunity for them to act out their Dom/sub relationship in a semi-public setting, and he’s going to control every aspect of the trip, from the clothes she packs to their activities onboard ship.

Just You & Me by Wendi Zwaduk

What’s a girl to do when she’s not ready to leave the single life but the right man has come along with a collar?

Ryder Lucas didn’t come to Exposed, looking for a sub. He joined his best friend’s club to demonstrate fetishes and enjoy the single life. Then he sees Cat and uses her for a scene. She’s everything he’s ever wanted in a sub and a woman. He won’t rest until the blonde bombshell is his.

Catharina ‘Cat’ McLean doesn’t want a permanent Master. She’s happy taking part in the occasional scene but won’t be collared. She’d rather be in control of her life. When Ryder asks her to be a part of a scene with him, she sees no reason to refuse. He’s tall, dark, handsome and she can’t resist him. He knows how to play with her fetishes—wax, ice and bondage—but is she willing to submit to him on a full-time basis?

Who knew finding a heart’s desire would be this all-consuming?

His Lucky Day by Tori Carson

KT thought a quick romp in the forest with Stephen would vanquish him from her dreams, instead, their untamed passion ignites a fire neither can control.

Stephen was instantly attracted to the exotic KT Riley. Though she makes her desire for him clear, Stephen considers her forbidden fruit. His sexual passions aren’t for the faint of heart so he refuses to mix business with pleasure. When they become stranded together in the forest, the chemistry between them is more than he can resist.

KT is a woman on a mission. Seduce the handsome game warden who has been destroying her concentration and get him out of her system once and for all. Her plan was foolproof except for two small miscalculations. The man isn’t the forgettable type and the sex goes beyond physical gratification.  It’s all consuming—a craving from which she’ll never break free.

Bound to Happen by Zoë Mullins

Jaymie knows better than to date her best friend’s brother, but there is no way she can keep the sexy Dom in the ‘friend-zone’.

You don’t date your best friend’s brother. At least not without prior permission from said friend.

Jaymie left Port Ellis for the big city, but she remained a townie at heart. Pinching pennies and clipping coupons, she and her best friend Melissa have enough cash to move home and open The Mudhouse Café. But where there is Mel, there is her sexy, older brother Maxwell who Jaymie has been crushing on since high school.

When Jaymie discovers Maxwell is Master M, the online Dom she’s been chatting with for months, her first thought is ‘yippee’ then reality hits. She can’t risk her friendship with Mel just to date Maxwell. She should keep him in the friend-zone but she is destined to be in his bed and under his kinky control.

Maxwell’s divorce offers him a new beginning in his hometown and the freedom to explore what it means to be a Dom. He never guessed his online submissive, Jay, was his little sister’s best friend. She is almost like family and she should be off limits. But he’s done denying what he wants, and what he wants right now is Jaymie in his bed, preferably tied to each corner.

It may have taken them years to get to this point, but it was always bound to happen.

Jaye Ripley gets more than free tickets on daretospankme.com. Jack Blackhurst banters hard and talks dirty. Is she ready for harsh treatment?

Jaye Ripley’s lurked on daretospankme.com for longer than she’s ready to admit. With a straight-laced upbringing and an ex-partner disaster in her past, this principled college tutor has hidden yearnings for domination.

When she encounters the offer of free concert tickets online from BlackRunSkiFreakDom, she clicks reply on impulse. That night, their intense banter holds Jaye captive. Dark, handsome Jack Blackhurst inspires new, exhilarating urges in her and not just because of his smoldering looks. She agrees to go to his place, even though she’s crossing boundary lines, but his magnetism is more debilitating than super-strength absinthe.

Jack is not the boring back doctor most would imagine from his Harley Street Chiropractor profession. He’s a high-flying consultant to an elite VIP clientele. Yet his kink preferences are as confidentially guarded as his client list—as is the secret naughty nook in his renovated attic.

This Doctor Dom has Jaye in raptures. There are sensations from feathers to ice and candle-play. In his kink-furbed playroom, Jaye feels like she’s finally reached her fantasy pleasure peak. Who knew a Doctor Dom could be this freeing?

But in the morning Jaye receives the cold-shoulder treatment. She’s shoved into a cab like a seedy secret with threats of repercussions from kissing and telling. She’s irritated as hell when her mind returns to that stellar night. But a run-in with black ice might mean Jaye hasn’t seen the back of Jack quite yet!