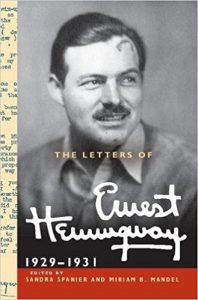 Cambridge University Press is releasing the fourth volume of Hemingway letter. They provide quite an insight to the author’s personal life and his feelings about becoming a celebrity.

‘My private life being an open sewer, I am sometimes a little touchy,’ he wrote. The letters show a man who was quite unnerved by his private life becoming public, and asked family and friends to remain silent about him.

“If I’m to write at all, I have to keep my private life out of it.” He also angrily demanded his publisher remove personal details from the dust jacket of his book The Sun Also Rises.

In a press release, Sandra Spanier, an editor on the book said: “On the one hand, you have a writer who cares very much about his public reception. He’s always asking how the sales are going. He loves good reviews. He courts celebrity to some extent. On the other hand, he does have this intense desire for privacy. He may have been a little sensitive about his divorce from his first wife Hadley and remarriage to Pauline.” She added that the letters reflect his objections to publishers exaggerating his first world war service, when he was an ambulance driver for the American Red Cross.”

The Hemingway Letters Project is producing a comprehensive scholarly edition of the author’s some 6,000 letters, approximately 85 percent of them never before published.