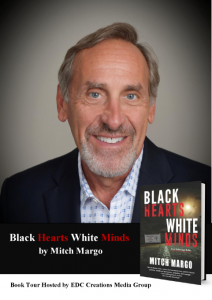 A former reporter for The Detroit News and Los Angeles Herald Examiner and a syndicated columnist for 14 years, Mitch Margo is a native New Yorker and St. Louis trial lawyer. He’s witnessed the clash of cultures which are woven into his first novel, Black Hearts White Minds.  Much of the story is drawn from his personal experiences, interviews, and hundreds of hours of research. He credits his eclectic law practice for a new storyline every few days.

As general counsel to the Missouri Valley Conference, and a former youth coach, Mitch has an insider’s view of basketball that enables him to write about it authentically. He’s also a member of the Washington University Sports Hall of Fame, at one time holding the school record in just about every baseball statistic. He’s proud of his days as a student/athlete, but hasn’t lost sight of the fact that you can’t get too much farther from Cooperstown and still be in a hall of fame.

BPM:  Have you always been a writer?  Do you recall how your interest in writing originated?

I’ve enjoyed writing and reading for as long as I can remember. I’m a child of Watergate and that’s why I was drawn to journalism as a young man. But I also loved creative writing, which is what journalism has now become!

BPM:  You are a lawyer, how has that influenced you and your writing?

Most people think being a trial lawyer is what they see on TV — lawyers making impassioned speeches in courtrooms to edge-of-their-seat jurors. Not so. Most of a trial lawyer’s communications are written in briefs and motions to the judge. 95 percent of all lawsuits are settled before trial. So being a persuasive writer is a great advantage and persuasive means succinct, clear and even entertaining. Most lawyers write in long, complicated, boring sentences. I assume that judges curse them and love me.

BPM:  Tell us about your latest book. What do you hope readers take away from it?

Black Hearts White Minds (BHWM) is a story about a time in history that few experienced and most would rather ignore. I wrote the book about the Civil Rights movement because I missed it. In 1964 I was nine years old and growing up in New York. After reading Black Hearts White Minds, I hope readers are left with the feeling that they’ve lived in the Deep South during segregation just like the characters. I hope they take away the frustration of the African American community that was constantly harassed and kept in a different form of slavery by a white power structure driven by money, power and ignorance.

BPM:  Give us an insight into your main character. What does he/she do that is so special?

Carl Gordon is the main character, but really only one of the “important” characters. He drags his 12 year old son from New York to Stockville, Alabama to enforce the 1964 Civil Rights Act and he’s remarkably unprepared for what he is about to encounter — the Klan, local law enforcement, the black community. But he’s also a great lawyer and a quick learner. He’s a hero in his own way, but no more so than Micah, a Black, self-taught intellectual auto mechanic who also happens to be the strongest man in Frost County, Alabama, and a disciple of Malcolm X. And by the way, Carl and Micah hate each other.

BPM:  Was there a real-life inspiration behind your development of characters?

Three of the characters are drawn from people I know or have known in the past. Did I mention I love those people? Think about it, they’re interesting enough to make a fictional character out of them alone. Now that’s a real life character! The rest of the characters are composites of people I’ve known, stories I’ve read and my imagination. I think all writers will tell you that there are ribbons of themselves running through their characters. That’s certainly true for me. Maybe that’s why writers become such good friends with the characters they create.
BPM:  How did you come up with the title for Black Hearts White Minds?

This book had more working titles than I can remember. I would list them for you, but one of them might just be the name of the sequel. (Spoiler alert!) My publisher, along with a focus group came up with Black Hearts White Minds and I love it. A Black Heart could be attributed to several of the characters, black and white. So could a white mind. “Black” and “white” have more than one meaning each, and nothing is just black and white.  END_OF_DOCUMENT_TOKEN_TO_BE_REPLACED