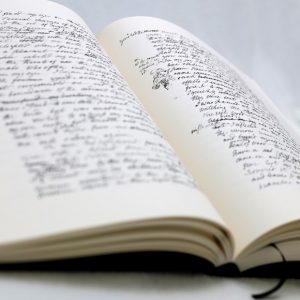 Frankenstein was born from a challenge. Lord Byron, Percy Shelley (Mary’s lover), John Polidori (Byron’s physician) and Claire Clairmont (Mary’s stepsister) were each challenged to write a ‘ghost story.’  At the time, 1816, they were all summering at Lake Geneva, Mary was 18 years old, and she finished her story in 1817. That ghost story has now become a classic — Frankenstein also known as The Modern Prometheus.

Written in notebooks that show grammar corrections in Mary’s hand, as well as Percy’s, it is the tale of how “the scientist Victor Frankenstein brings life to a monster stitched together from human remains, was published in 1818.”

The original notebooks are held in the Bodleian library in Oxford. March of this year will mark the 200th anniversary of the books first publication, and SP Books will be releasing the notebooks to mark the occasion with a limited printing of 1000 copies on March 15th.

Most readers today, are most familiar with an 1831 edition of the book that contains vast revisions from the original notebooks. Releasing the original is “to give the impression to readers that they are holding the original – so you have the feeling the author gave you the notebooks.”

The notebooks show the evolution of Frankenstein, how Shelley created a more ‘human’ monster. They also show the editing by her eventual husband, Percy Shelley.

Copies and details can be found on SP Books website.