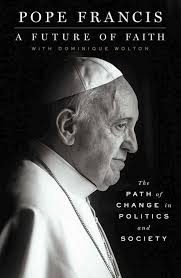 St. Martin’s Press will publish a new book by His Holiness Pope Francis entitled A FUTURE OF FAITH: The Path of Change in Politics and Society, co-authored by Dominique Wolton. North American publishing rights were acquired by SMP Chairman Sally Richardson with VP Editorial Director Joel Fotinos from Maria Vlachou at Humensis as part of a simultaneous global publication with Bluebird, an imprint of Pan Macmillan, who will publish the title in the UK & Commonwealth.

The book will be published on August 7, 2018 and available in hardcover, ebook, and audio formats. First published in France by Editions de L’Observatoire, this book made headlines around the world when it was published last fall.

For a year, Pope Francis gave twelve talks to the French intellectual Dominique Wolton. Their warm and human conversations resulted in this exceptional and unique dialogue that freely addresses the major issues of our time and human existence: peace and war, politics and religions, globalization and cultural diversity, fundamentalism and secularism, Europe and migrants, ecology, inequalities in the world, ecumenism and interreligious dialogue, the individual, family, otherness, time, trust and joy. No subject is taboo; divorce, the abuse scandal in the Church, the Pope’s experience of psychoanalysis at age 42, and the women who have played an important role in the Pope’s life from early girlfriends, to his mother.

This book illustrates the vision of the pope for the Catholic Church and society: breaking down walls and building bridges. Joel Fotinos comments, “It is an honor for St. Martin’s Press to publish a book by His Holiness Pope Francis. This book offers compelling insights into Pope Francis’ provocative and bold ideas which are incredibly important, inspirational and timely for our world.”

About the Book A FUTURE OF FAITH: The Path of Change in Politics and Society By His Holiness Pope Francis, co-authored by Dominique Wolton Published in North America by St. Martin’s Press Publication: August 7, 2018.