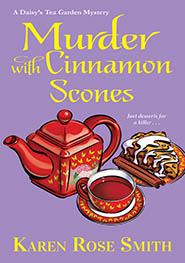 Daisy Swanson and her Aunt Iris run a delightful shop in Pennsylvania’s Amish country with an emphasis on tasty teas and treats—but murder is not so sweet . . .

As local merchants unite to attract tourists for a much anticipated weekend quilting event, business is sure to spill over into eateries like Daisy’s Tea Garden. Gorgeous craftwork is hanging everywhere—but among the quilts, potholders, and placemats, one gallery owner is wrapped up in some dangerous affairs . . .

Reese Masemer had been dating one of Daisy’s employees, Tessa, an artist, though their last interaction was as strained as a cup of loose leaf tea. Now Reese has been found dead near a covered bridge where Tessa’s been practicing her sketches. She’s the obvious suspect, but Daisy’s learning that there were some major secrets in Reese’s background, and several of his relationships were infused with resentment. To save Tessa, she’ll have to find out who’s tainted this quaint little town with murder . . .

Daisy watched as Tessa took another look up at the second floor. “Are you saying you don’t trust Reese?”

“You know it’s hard for me to trust anyone.”

Daisy did know that. But before they could delve into that subject, Tessa changed it. “We’re going to be passing Woods. We could stop in and say hi to Jonas.”

Tessa was aware that Daisy and Jonas Groft had spent time together. Daisy enjoyed his company and, if she had to admit it, more than enjoyed it. However, Jonas had closed his shop from Christmas to New Year’s and gone to Philadelphia to spend the holidays with good friends. They’d spent New Year’s Eve together, though, with her girls. That was a few days ago. Since then, she hadn’t heard from him. She wasn’t sure she should visit Woods because she didn’t want to push.

Because of his background as a former Philadelphia detective, Jonas had gotten pulled into her life to help

Jazzi search for her birth mother. It was quite possible he didn’t want a serious relationship. To be honest, she wasn’t sure she did.

Still, Tessa caught her arm and pulled her along, saying,

“Come on. You’ve got to take risks in your life. You don’t very often.”

“Opening the tea garden with my aunt was a risk.” After her husband had died, she’d returned to her hometown to start over. She and her aunt Iris had bought a house to establish Daisy’s Tea Garden, and Daisy had also renovated an old barn where she and the girls now lived.

“Your aunt knows more about tea than Wikipedia. And the two of you created a place where everybody comes to chat and relax, eat good food, and drink the best tea. How could it have missed?”

“It still could. You know the track record with small businesses.”

“When you become a rich and famous artist, you won’t want to be my kitchen manager.”

With a frown, Tessa studied Daisy. “If I ever do become rich and famous, I’ll still be your best friend. And if I have to quit my job, I would find you the best kitchen manager on the face of the earth.”

“Now that reassures me,” Daisy said wryly as they stood in front of Woods.

“Come on,” Tessa urged again, opening the door and pulling Daisy inside. “At least we’ll get warm for a few minutes.”

Daisy just shook her head and gave in to the inevitable enthusiasm Tessa usually exhibited. However, to her relief, Jonas was nowhere in sight within the store. Elijah Beiler was. He was an Amish woodworker who sold furniture through Jonas’s shop. In his forties, Elijah wore black pants with suspenders and a dark blue shirt. His beard signified he was married.

“No. He went searching for reclaimed wood. He’s thinking about adding a line of furniture created from it.”

Elijah went to the counter in the back of the store and reached underneath. After he brought out a few sketches, he carried them to Daisy and Tessa. “Would you like to look at these? They’re what Jonas has in mind.”

When Daisy had renovated the old barn that she now called home, she’d included an island in her kitchen. She’d examined many in her search for the best one for her use and was familiar with the styles. She admired the plans for islands that Jonas had designed, as well as those for a sideboard table and a practical desk.

“You and Jonas are both very talented,” Daisy said, meaning it.

A humble man like most Amish, Elijah reddened at her praise. “Like me, Jonas takes pleasure in bringing the real nature of wood to life.”

“I’m looking forward to seeing what the two of you come up with,” Daisy assured him. She glanced at Tessa. “We’d better go. I want to get home to the girls.”

“I’ll tell Jonas you stopped in,” Elijah assured them.

Daisy wasn’t certain she wanted him to do that, but she kept silent. After a round of good-byes, she and Tessa left Woods.

They walked briskly up the street. In front of Daisy’s Tea Garden, they paused and glanced at their Victorian. The tea garden took up the first floor. Tessa lived in the second-floor apartment and used the attic for painting.

A light that came on at dusk and went off at dawn glowed on the front porch. It illuminated the pale green

exterior with its white and yellow trim. On the first floor Daisy and her aunt had furnished the be-served or buyit-

to-go room with oak, glass-top tables. She’d painted the walls the palest green. A second tea room on the first floor was a spillover area. It was also the room they used when they took reservations and served afternoon tea by appointment. That room’s walls were the palest yellow.

Daisy’s office was located to the rear of the tea room and the kitchen spread behind the walk-in room. They also had a side patio where they served customers outside, weather permitting. A private parking area for Daisy’s, her aunt’s, and Tessa’s vehicles ran in back of the Victorian.

“Business is still good,” Tessa reminded her. “Even though it’s early January and the tourist season has slowed down. That means the community is embracing Daisy’s and the tea garden is an integral part of the area.”

“I hope that’s what it means. The uptick in business could still be from the notoriety of the murder that happened here.”

Daisy’s Tea Garden had been the scene of a murder in the fall, and there had been publicity from that with local TV coverage as well as discussions on online blogs.

“Foster has really helped to spread the word about Daisy’s Tea Garden on social media too,” Tessa added.

“You have to give him credit for that.”

Foster Cranshaw was a college student Daisy had taken on when they’d gotten busier. He and Violet dated when she was home, and Daisy had mixed feelings about that. Yes, she wanted Violet involved in relationships so eventually she could find a permanent life partner. Daisy was sure marriage and vows would mean as much to her daughters as they had to her and Ryan. On the other hand, Violet was still young and she hoped her oldest and Foster weren’t too serious.

“Foster has been a huge help,” Daisy agreed. “I don’t know what we’d do without him. He has a way with customers, and his tech skills are a godsend.”

They were walking along the lane that led to the private parking lot when a shrieking alarm pierced the silence of the night.

Tessa spun around toward the direction from which they’d come. “That sounds like it’s coming from Revelations.”

along their street. But she followed Tessa as she raced down the sidewalk. Daisy wasn’t going to abandon her

As Tessa streaked past a candle shop, an insurance office, a store that sold hand-sewn purses and travel bags, as well as Woods, Daisy kept up with her pace. Elijah had come out of Woods and was staring down the street too.

Tessa ran by him and so did Daisy, realizing now that Tessa had been right. It was the alarm from Revelations that had sounded. Running along the side of the building to the back entrance, Tessa didn’t hesitate to go inside when she saw the door was opened.

Daisy called after her. “Tessa, wait! We don’t know what’s happened. It could be a fire . . . or anything.”

But Tessa didn’t wait. And when Daisy ran inside and caught up with her, she saw Tessa holding up Reese, who leaned heavily on her. There was blood on his forehead and down the side of his face.

Reese saw her do it and held up his hand. “You don’t need to call anyone. The alarm alerted the PD. They’ll be here.”

Tessa led Reese to a wooden captain’s chair and he flopped into it.

“What happened?” Daisy asked. Certainly, Reese didn’t do that to himself. Could someone still be in the gallery?

“An intruder got in before I reset the alarm. He hit me and escaped. I managed to smack one of the panic

Reese had definitely been hurt by someone. Papers from the desk were strewn across the floor. But something about his story didn’t seem to ring true. How could anyone have known the alarm was off ? Why hadn’t Reese reset the alarm after she and Tessa had left? Had a break-in really occurred? Or had something else happened that Reese didn’t want anyone to know about?

Readers Entertainmenthttp://dayagency.com
Previous articleCambridge University Opens Secret Library
Next articleAuthor Krista Davis Shares How Her Novel The Diva Cooks Up A Storm Made Her a Better Cook