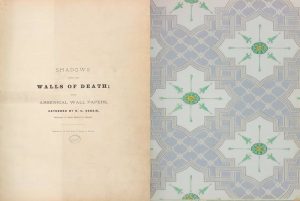 In today’s world, poison books usually refer to the words written on the page. Several librarians however, have discovered books that are actually poisonous to the reader.

Back in the 19th century, if you wanted you wanted a green book cover the most popular way to get one was to use arsenic. Librarians at the University of Southern Denmark just discovered several books with arsenic covers. The poison gives off a poisonous gas that can be inhaled and cause significant damage to the lungs, and continued exposure can lead to death.

The librarians believe the arsenic was being used as a protectorate against insects and mice. Plans are being undertaken to have the books digitized, but that will take an effort by several agencies for the protection of the librarians as well as the books.

Ironically, the most dangerous arsenic covered book ever released was written by a physician who was trying to warn people about the dangers of ‘arsenic-laced wallpaper’. The pages were filled with swatches of the poisonous wallpaper. Four copies of those books still exist and are under very careful security.