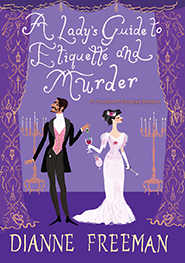 A Lady’s Guide To Etiquette And Murder: A Countess Of Harleigh Mystery by Dianne Freeman

Frances Wynn, the American-born Countess of Harleigh, enjoys more freedom as a widow than she did as a wife. After an obligatory year spent mourning her philandering husband, Reggie, she puts aside her drab black gowns, leaving the countryside and her money-grubbing in-laws behind. With her young daughter in tow, Frances rents a home in Belgravia and prepares to welcome her sister, Lily, arriving from New York—for her first London season.

No sooner has Frances begun her new life than the ghosts of her old one make an unwelcome appearance. The Metropolitan police receive an anonymous letter implicating Frances in her husband’s death. Frances assures Inspector Delaney of her innocence, but she’s also keen to keep him from learning the scandalous circumstances of Reggie’s demise. As fate would have it, her dashing new neighbor, George Hazelton, is one of only two other people aware of the full story.

While busy with social engagements on Lily’s behalf, and worrying if Reggie really was murdered, Frances learns of mysterious burglaries plaguing London’s elite. The investigation brings death to her doorstep, and Frances rallies her wits, a circle of gossips, and the ever-chivalrous Mr. Hazelton to uncover the truth. A killer is in their midst, perhaps even among her sister’s suitors. And Frances must unmask the villain before Lily’s season—and their lives—come to a most unseemly end . . .

You can purchase A Lady’s Guide To Etiquette And Murder at:
Kensington Books 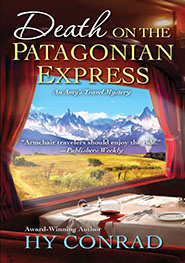 Death On The Patagonian Express: An Amy’s Travel Mystery #3 by Hy Conrad

Upon the breakout success of their travel agency blog, TrippyGirl, Amy Abel and her mother, Fanny, are asked to join a group of prominent travel writers on a scenic train tour of Patagonia. Their expedition seems to chug along smoothly until Fanny finds a body scavenged by condors in the wilderness. Even more unsettling, the corpse mysteriously disappears before fellow tourists arrive. Some question Fanny’s sanity, but doubt becomes horror when the tour owner’s angel investor is found dead in a similar position. As a number of “accidents” validate Amy’s suspicion of foul play, the Abels must outsmart one very conniving killer—or they’ll soon be en route to their final destination . . .

You can purchase Death On The Patagonian Express at:
Kensington Books 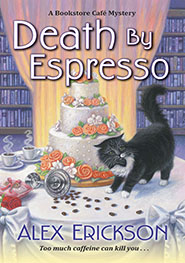 Death By Espresso: A Bookstore Cafe Mystery #6 by Alex Erickson

Bookstore-café owner Krissy Hancock has plenty to keep her occupied outside business hours, like preparing for her best friend’s wedding and solving a murder . . .

Krissy is meeting Vicki’s parents at the Pine Hills, Ohio, airport—it’s the least she can do as maid of honor, even if her relationship with Mr. and Mrs. Patterson is a bit strained. Besides, her own dad is coming in on the same flight. But there are a few additional arrivals, too. Her father’s brought a date—and the Pattersons, both actors, seem to have an entire entourage trailing behind them.

Uninvited guests are a headache—especially when one turns out to be, allegedly at least, the most important wedding planner in all the world. Though Vicki and Krissy have already made arrangements for a small, simple party, Vicki’s snobby drama queen mother has her own ideas. Cathy the wedding planner is raring to go, possibly energized by the chocolate-covered espresso beans she compulsively munches. But while the caffeine keeps her awake, it doesn’t keep her alive—and after Cathy chokes on an espresso bean after being hit in the head, Krissy has to find out who ended her supposedly stellar career . . .

You can purchase Death by Expresso at:
Kensington Books 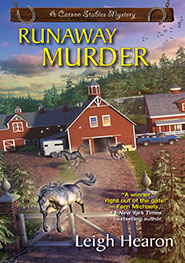 Breaking free from her mounting responsibilities on the Olympic Peninsula, Carson Stables owner Annie Carson reluctantly swaps muddy jeans for breeches to attend a dressage event in Southern California. But after settling into elegant digs at a historic mansion, she finds herself surrounded by palace intrigue, backbiting riders, and cold-blooded murder. As Annie makes heads or tails of clues scattered around the show ring, she must figure out which of her new acquaintances is a killer—before the crazed culprit takes the reins . . .

You can purchase Runaway Murder at:
Kensington Books