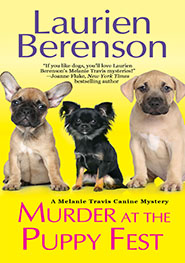 Murder At The Puppy Fest: A Melanie Travis Canine Mystery
by Laurien Berenson

Busy mom and pedigree Poodle owner, Melanie Travis doesn’t mind helping out at Puppy Fest, an annual fundraiser to benefit a local dog rescue. Considering the venue—Belle Haven mansion, owned by wealthy philanthropist Leo Brody—it’s shaping up to be the can’t-miss charity event of the summer. Unfortunately, when Melanie’s breeding background lands her in the doghouse with Jane, Leo’s snappy daughter who runs the rescue, Melanie finds herself simultaneously managing Puppy Fest and the millionaire’s hopelessly fractious family.

But once Puppy Fest kicks off, Leo is nowhere to be found—until Melanie discovers his current mistress crouching over his dead body. According to police, the father’s severe nut allergy went into overdrive after he accidentally consumed a contaminated cookie. However, Libby, one of Leo’s children and a friend of Melanie’s Aunt Peg, believes someone deliberately put him down for good . . .

“It’s mutts vs. purebreds as Melanie Travis investigates the death of a dog-loving philanthropist . . . Worth the price of admission.” —Kirkus Reviews

You can purchase MURDER AT THE PUPPY FEST at:
Kensington Books 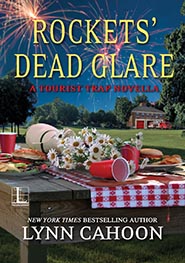 s sunny South Cove, California, gears up for their annual Fourth of July celebrations, a local murder threatens to kill the fireworks . . .

South Cove’s local businesses are up in arms after volunteer fire chief Barry Gleason threatens to shut down anyone who doesn’t comply with the fire code. But when Barry schedules a training burn in an old abandoned barn, he is the only one who doesn’t come out alive. Jill Gardner—owner of Coffee, Books, and More—smells murder in the ashes. She’ll have to work quickly to nab a killer with a short fuse—or else everyone’s holiday will end with a fizzle . . .

Praise for The Tourist Trap Mysteries

“Murder, dirty politics, pirate lore, and a hot police detective: Guidebook to Murder has it all! A cozy lover’s dream come true.” —Susan McBride, author of The Debutante Dropout Mysteries

You can purchase ROCKET’S DEAD GLARE at:
Kensington Books 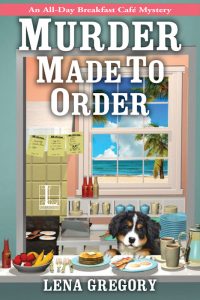 To save her cozy Florida diner, Gia Morelli must choke down a heaping helping of murder . . .

New York native Gia Morelli is just getting used to life in Florida when she gets word that the town government wants to shut down her pride and joy: the charming little diner known as the All-Day Breakfast Café. A forgotten zoning regulation means that the café was opened illegally, and hardboiled council president Marcia Steers refuses to budge. Gia is considering hanging up her apron and going back to New York, but before she gives up on her dream, she discovers something shocking in the local swamp: Marcia Steers, dead in the water. There’s a secret buried in the books at town hall, and someone killed to keep it hidden. To save her café and bring a killer to justice, Gia and her friends will have to figure out a killer’s recipe for murder . . .

“Hold on to your plates for this fast-paced mystery that will leave you hungering for more!”—J.C. Eaton, author of the Sophie Kimball Mysteries, on Scone Cold Killer

“Family secrets, old mansions, and a growing list of murder victims—these elements and more blend together to make an intriguing as well as entertaining cozy mystery.”—RT Book Reviews on Occult and Battery

“As breezy and salty as a gust of wind off the chilly bay waters.”—Juliet Blackwell, New York Times bestselling author of the Witchcraft Mysteries on Death at First Sight

“An intriguing opening to a fun new series.”—E. J. Copperman, national bestselling author of the Haunted Guesthouse Mysteries on Death at First Sight

You can purchase MURDER MADE TO ORDER at:
Kensington Books