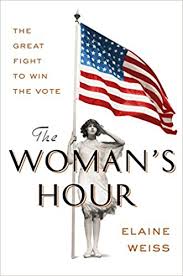 Steven Spielberg’s Amblin Television announced today that it has optioned the rights to Elaine Weiss’s critically-acclaimed Viking book, THE WOMAN’S HOUR: The Great Fight to Win the Vote, and will develop it as a long-form project for premium cable or streaming platforms.

Former Secretary of State Hillary Rodham Clinton, Elaine Weiss, as well as Amblin Television’s Co-Presidents, Darryl Frank and Justin Falvey, will serve as executive producers. The book follows the remarkable activists who led the decades-long fight to grant women the right to vote and sheds light on how close the battle to ratify the 19th Amendment really was. An inspiring story, THE WOMAN’S HOUR, celebrates those who changed history and laid the foundation for the civil rights movement that came decades later.

Secretary Clinton said, “At the heart of democracy lies the ballot box, and Elaine Weiss’s unforgettable book tells the story of the female leaders who– in the face of towering economic, racial, and political opposition – fought for and won American women’s right to vote. Unfolding over six-weeks in the summer of 1920, The Woman’s Hour is both a page-turning drama and an inspiration for everyone, young and old, male and female, in these perilous times. So much could have gone wrong, but these American women would not take no for an answer: their triumph is our legacy to guard and emulate.

She continued, “I am thrilled to be working with Elaine, Steven and everyone at Amblin Television on bringing this important project to audiences everywhere.”

Elaine Weiss is an author and a journalist whose newest book, THE WOMAN’S HOUR, was recently released by Viking. It has received critical acclaim from The New York Times Book Review, Wall St. Journal, NPR, and the Christian Science Monitor. Critics hail the book as “important” and “timely”, “stirring” and “definitive” a “riveting” and “remarkably entertaining” “political thriller” which is “compulsory reading” for understanding our current historic moment.