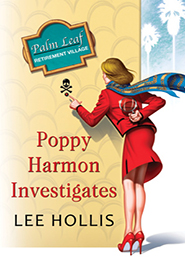 Lee Hollis begins a delightful new series in which Poppy Harmon and her friends find that life after retirement can be much busier—and deadlier—than any of them ever anticipated . . .

When Poppy goes from complacent retiree to penniless widow in a matter of weeks, the idea of spending her golden years as the biggest charity case in Palm Springs renders her speechless. With no real skills and nothing left to lose, Poppy uses her obsession with true crime shows to start a career as a private eye . . .

But after opening the Desert Flowers Detective Agency with help from her two best friends, Violet and Iris, Poppy realizes that age brings wisdom, not business—until she convinces her daughter’s handsome boyfriend, Matt, to pose as the face of the agency. It’s not long before Matt’s irresistible act snags a client desperate to retrieve priceless jewelry burglarized from an aging actress at the Palm Leaf Retirement Village. Or before Poppy stumbles upon the bloodied body of the victim’s arch rival . . .

In a flash, Poppy’s innocent detective gig is upstaged by a dangerous murder investigation riddled with slimy suspects and unspeakable scandal. As she and her team uncover the truth, Poppy must confront the secrets about her late husband’s past and swiftly catch a killer lurking around the retirement community—even if it means turning her world upside down all over again.

You can purchase Poppy Harmon Investigates at:
Kensington Books 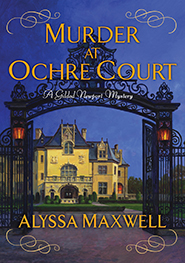 In the summer of 1898, reporter Emma Cross investigates a shocking death among the bright lights of Newport’s high society.

After a disappointing year as a society columnist for the Herald and staying with her more well-heeled Vanderbilt relatives in New York City, Emma has returned to the salty air, glittering ocean vistas, and grand stately mansions of Newport, Rhode Island, more determined than ever to report on hard news.

But for now she’s covering the social event of the season at Ochre Court, a coming-out ball designed to showcase Cleo Cooper-Smith, who will be literally on display, fittingly as Cleopatra, in an elaborate tableau vivant. Recently installed modern electricity will allow Miss Cooper-Smith to truly shine. But as the deb ascends to her place of honor, the ballroom is plunged into darkness. When the lights come back on, Cleo sits still on her throne, electrocuted to death.

Quickly establishing that the wiring was tampered with, Emma now has a murder to investigate. And the array of eligible suspects could fill another ballroom—from a shady New York real estate developer to a neglected sister and the mother of a spurned suitor. As Emma begins to discover this crime has unseen connections to a nefarious network, she puts her own life at risk to shine a light on the dark motives behind a merciless murder.

You can purchase Murder at Ochre Court at:
Kensington Books 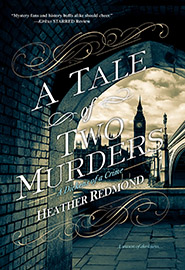 A Tale Of Two Murders: A Dickens Of A Crime #1 by Heather Redmond

“For Dickens fans, this charming little puzzler will prove a delight.” —Booklist

On the eve of the Victorian era, London has a new sleuth . . .

In the winter of 1835, young Charles Dickens is a journalist on the rise at the Evening Chronicle. Invited to dinner at the estate of the newspaper’s co-editor, Charles is smitten with his boss’s daughter, vivacious nineteen-year-old Kate Hogarth. They are having the best of times when a scream shatters the pleasant evening. Charles, Kate, and her father rush to the neighbors’ home, where Miss Christiana Lugoson lies unconscious on the floor. By morning, the poor young woman will be dead.

When Charles hears from a colleague of a very similar mysterious death a year ago to the date, also a young woman, he begins to suspect poisoning and feels compelled to investigate. The lovely Kate offers to help—using her social position to gain access to the members of the upper crust, now suspects in a murder. If Charles can find justice for the victims, it will be a far, far better thing than he has ever done. But with a twist or two in this most peculiar case, he and Kate may be in for the worst of times . . .

You can purchase A Tale of Two Murders at:
Kensington Books 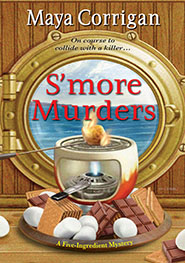 Managing a fitness club café and collaborating on a cookbook with her grandfather are Val Deniston’s usual specialties, but she’s about to set sail into nearby Chesapeake Bay—straight into a murder case . . .

Since catering themed events is a good way to make extra cash, Val agrees to board the Titanic—or at least cater a re-creation of the doomed journey on a yacht. The owner of the yacht, who collects memorabilia related to the disaster, wants Val to serve the last meal the Titanic passengers ate . . . while his guests play a murder-mystery game. But it is the final feast for one passenger who disappears from the ship. And that’s only the tip of the iceberg.

Now Val has to reel in a killer before s’more murders go down . . .

You can purchase S’more Murders at:
Kensington Books 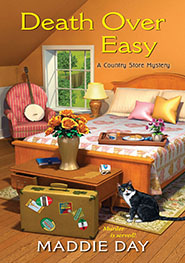 Death Over Easy: A Country Store Mystery #5 by Maddie Day

Restaurateur Robbie Jordan is ready for the boost in business a local music festival brings to South Lick, Indiana, but the beloved event strikes a sour note when one of the musicians is murdered . . .

June’s annual Brown County Bluegrass Festival at the Bill Monroe Music Park in neighboring Beanblossom is always a hit for Robbie’s country store and café, Pans ‘N Pancakes. This year, Robbie is even more excited, because she’s launching a new bed and breakfast above her shop. A few festival musicians will be among Robbie’s first guests, along with her father, Roberto, and his wife, Maria. But the celebration is cut short when a performer is found choked to death by a banjo string. Now all the banjo players are featured in a different kind of lineup. To clear their names, Robbie must pair up with an unexpected partner to pick at the clues and find the plucky killer before he can conduct an encore performance . . .

Includes Recipes for You to Try!

You can purchase Death Over Easy at:
Kensington Books