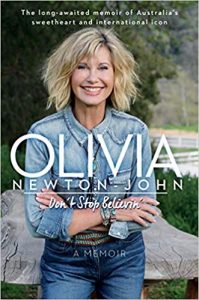 Available for the first time in the United States, this edition will include a new afterword by Ms. Newton-John.

For more than five decades, Olivia Newton-John has been one of our most successful and adored entertainers.  A four-time Grammy Award winner, she is one of the world’s bestselling recording artists of all time, with more than 100 million albums sold; numerous Country Music, American Music, Billboard and People’s Choice Awards; an Emmy Award; ten #1 hits and more than fifteen Top 10 singles among her successes.  Her unforgettable role in Grease (opposite John Travolta) catapulted her into super-stardom.

In addition to her music and screen successes, Olivia is perhaps best known for her strength, courage, and grace.  After her own personal journeys with cancer, she has thrived and become an inspiration for millions around the world.  A tireless advocate for countless charities, her true passion is as the founding champion of the Olivia Newton-John Cancer Wellness & Research Center in her hometown of Melbourne, Australia.

“I hope this story of my life from my early years up to today will bring some inspiration and positivity to the reader,” says Newton-John. “We all share so many experiences in our own unique way.”

“Olivia Newton-John is a beloved icon whose immense talent and compassion has touched the lives of legions of fans, myself included,” said Jennifer Bergstrom, Gallery Books’ SVP and Publisher.  “We are thrilled to be publishing her incredible story.”