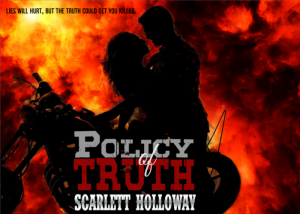 Five years ago, Tamra “Durty” Simon’s life was falling apart, and she had a one-way ticket to six-feet under. And if it hadn’t been for the Death’s Angels Motorcycle Club swooping in, dusting her off, and transforming her into the badass biker she is today, she’d be taking a dirt nap. Now, she has everything she ever wanted—or so she thought.

Brett “Sting” Jackson is on a mission, and nothing is going to stop him—not even the sexy, enticing female biker who makes him hard with a single look. Too bad he’s lying and keeping secrets from her. But the alternative could get her killed, and that’s not a risk he’s willing to take.

It took Sting crashing into her life to make Durty realize there’s something else in this world she wants to ride as hard as her bike—too bad fate has other plans for them. When a rival club makes a move against the Angels, all hell breaks loose. Lives will be lost, secrets will be revealed, and lies will be exposed. Because in the motorcycle world, lies may get you hurt, but the truth can get you killed.

ABOUT THE AUTHOR
Growing up on the Central Coast, Scarlett Holloway always dreamed of seeing her name on the cover of a book and on the New York Times Best Seller List. What better way than to bring part of her past onto the pages of a novel, as well as writing about issues that women face on a daily basis? When she is not in her bunny hole writing, she is a massage therapist, trying to help people through therapeutic healing. Scarlett is hopelessly devoted to her husband, who she lovingly calls her plot bunny, and is active in her teenage son’s life.