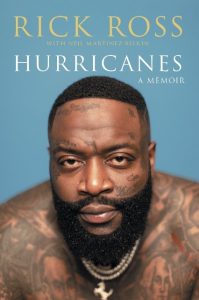 The memoir will chronicle Ross’ coming of age amid Miami’s crack epidemic, his star-studded controversies, and his unstoppable rise to fame.

“My story has always been deeper than rap,” Ross says. “With this book I wanted to go deeper than I ever have. I wanted to tell people about the life of William Leonard Roberts.”

In HURRICANES, Ross moves beyond the headlines, opening up about the experiences that inform his creative process. His upbringing in Carol City. His past as both a drug dealer and correctional officer. His scuffles in the streets and in the industry. The seizures. The drive-by shootings. The 2015 arrest on kidnapping and assault charges. It is a remarkable story of not only surviving the storms of life but reaching the highest levels of achievement in spite of them.

“Most people know Rick Ross as a global icon, but few are familiar with his origin story. Hurricanes transcends the conventions of celebrity memoir to offer an intimate and inspiring portrait of an artist who at every turn defied the odds and continues to change the game,” said Peter Joseph, editorial director of Hanover Square Press.

In 2006, Ross’ first single “Hustlin’” became a chart-topping hit and launched him to fame. Since then all nine of his albums have landed in the Top 10 of the Billboard 200, including five No. 1 debuts. In 2009 he founded his own record label, Maybach Music Group, which is home to artists Meek Mill, Wale and Gunplay. In 2018 he unveiled RICH by Rick Ross, a collection of luxury grooming products. His tenth album, Port of Miami II, is slated for release in 2019.

Readers Entertainmenthttp://dayagency.com
Previous articleTHE ANDROMEDA EVOLUTION, SEQUEL TO THE ANDROMEDA STRAIN BEING PUBLISHED
Next articleSequel Of Paranormal Adventures Delves Deep Into the Inner Workings Of The Author’s Mind!