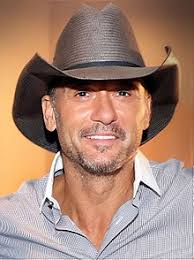 Harper Wave, an imprint of HarperCollins Publishers, announced it will publish GRIT & GRACE: Train the Mind, Train the Body, Own Your Life by music and film superstar Tim McGraw on November 5, 2019.  The deal for World rights was negotiated between Julie Will, VP Editorial Director, Harper Wave and CAA.

Tim McGraw is as well-known for his unparalleled accomplishments in the entertainment industry as he is for his boundless energy–he is the embodiment of health, vitality and success. But only a decade ago, he found himself struggling with his health. The demands of his meteoric career and life on the road had taken a toll. McGraw came to a crossroads where knew that unless he made his physical health a priority, he would put his personal happiness and professional success at risk. In GRIT & GRACE, McGraw shares his transformation story along with encouragement, practical advice and mental approach together with exercise tips to help readers become healthy, strong and fit in mind and body.

Said McGraw: “I’ve gone through a physical transformation in the last ten years, but it’s not just my appearance that has changed. My mind is clearer, my sense of purpose is sharper, and my relationships are deeper. Consistent physical exercise helps me bring focus to my life and to the people who mean the most to me. That’s something we all want. And I believe it’s something that is available to anyone who wants it, regardless of their level of fitness. I want this book to help people find what works for them by sharing the mental and physical approach that has worked for me.”

For the first time, in GRIT & GRACE, McGraw will share the details of the mental and physical routine that got him in the best shape of his life. He suggests that there is no magic formula to getting stronger and healthier: it is about making a commitment to do and be better, and holding yourself accountable each day. McGraw didn’t follow a playbook or have a squad of trainers overseeing his every step. He describes his way of getting into shape as more “maverick”–tuning into a vision of what you personally want to achieve, staying focused, and putting in the work.

Said Julie Will, “We’re thrilled to be partnering with Tim McGraw on this one-of-a-kind celebrity lifestyle book. GRIT & GRACE is a hybrid of narrative and practical, personal and prescriptive.  We can’t wait for his fans to go on this incredible journey with Tim, and perhaps become inspired to change their own lives in the process.”

ABOUT TIM MCGRAW:
Tim McGraw has sold more than 50 million records worldwide and dominated the singles charts with a stunning 43 #1 singles. His most recent and first ever joint album with wife Faith Hill – The Rest Of Our Life – was released November 2017 and debuted at #1 on the Billboard Top Country Albums chart and #2 on the Billboard 200 Albums chart. He is the most played country artist since his debut in 1992, with two singles spending over ten weeks at #1 (“Live Like You Were Dying” and the genre-breaking “Over and Over”). His multi-week #1 single “Humble and Kind” from 2015’s Damn Country Music won the Grammy for Best Country song, spawned a New York Times Best Seller book and won a coveted Clio Award for Best Integrated Campaign.