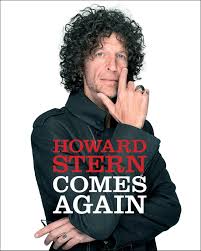 Howard Stern’s first book in more than twenty years, HOWARD STERN COMES AGAIN, will be published by Simon & Schuster on May 14, 2019.

Private Parts, published in 1993, was at that time the fastest-selling book in the history of Simon & Schuster. When the first-printing of 250,000 copies sold out in just a few hours, a second printing of 600,000 copies was ordered. Within two weeks the book would be in its eighth printing, for a total of more than one million copies. So great was the demand that 10,000 people turned up for a signing at the midtown Barnes & Noble, creating a massive traffic jam in which Stern himself was trapped, effectively shutting down Fifth Avenue. Private Parts went on to spend 20 weeks on the New York Times bestseller list—all the more remarkable considering that several national accounts refused to sell the book.

Stern’s follow-up, Miss America, released in 1995, sold even faster. Barnes & Noble recorded 33,000 sales on publication date—a one-day record for the chain at that time. 15,000 people showed up for a signing at a Borders Books & Music in Los Angeles. Miss America spent 16 weeks on the New York Times bestseller list.

“I’ve been waiting two years for this book to be finished, because Howard Stern told me to be patient,” said Jonathan Karp, Publisher of Simon & Schuster. “It was well worth the wait. HOWARD STERN COMES AGAIN is certain to be one of the most entertaining and widely read books of the year.”

Stern, when asked to comment, offered “F*#k Hemingway! I put my heart and soul into this book and could not be more proud of it.”

World rights were acquired by Jonathan Karp and Sean Manning from Don Buchwald at BUCHWALD (NY/LA). The book will also be published by Simon & Schuster’s international companies in the United Kingdom, Australia, India, and Canada.