Frankenstein Gets An Upgrade by Sheila English 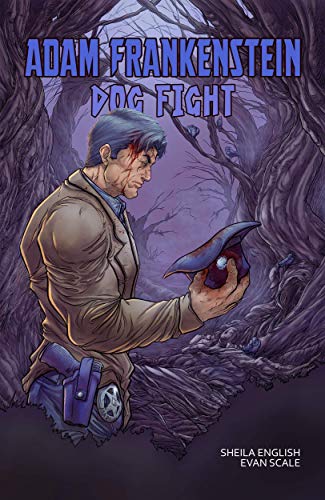 Frankenstein Gets An Upgrade a new comic series from Sheila English

Mary Shelley’s creature, Frankenstein has been featured in many comic books, but this year he’s been given an upgrade.

In Dog Fight, Adam’s immortal dog has been taken by men who run an infamous dog fighting ring.  The dog, Bella, is Adam’s main source of companionship and he will do anything to get her back.

The comic isn’t for children as it deals with mature themes and has some profanity.

“To me, the best stories are the ones where we fight for someone we love, or a cause that’s important to us,” says Sheila English, the author of the comic.  “That isn’t always a person.  In this case it’s Adam’s dog, who has been his companion for decades.  And for me, I wanted people to be aware of how horrible dog fighting is.  So, I put those things together in Dog Fight.”

The illustrator, Evan Scale, worked closely with Sheila English to ensure the characters match the stories English has written already in her short story collections and upcoming novels.

“Evan got everything perfect.  It was like he could look into my mind and see through my imagination,” English shared.

The comic follows Adam Frankenstein as he wakes up dead through the rescue of the dog.

“Anyone who knows me will know that the dog survives and Adam even saves other dogs he finds there,” English says.

The comic can be found on Amazon, Kobo and Apple Books in ebook now and will be available in print in June.

The comic book is currently #1 on Amazon follow the link to grab your copy!

Readers Entertainmenthttp://dayagency.com
Previous articleNew Mysteries for May!
Next articleThere’s a Book for That: Vaccines

Heidi Hostetter loves stories of family, forgiveness and second chances so we knew we wanted to hear all about her new novel- The Girl...
Read more