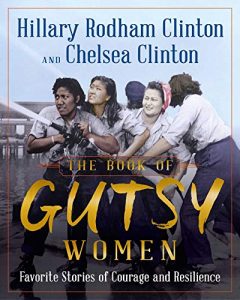 Hillary Rodham Clinton and Chelsea Clinton will publish THE BOOK OF GUTSY WOMEN: Favorite Stories of Courage and Resilience on October 1, 2019, with Simon & Schuster.

Celebrating the women who have inspired them throughout their lives, THE BOOK OF GUTSY WOMEN will feature portraits of more than 100 women, celebrating the histories that all too often get overlooked or are left unwritten.

The women featured in the book range from Greta Thunberg, a 16-year-old climate activist whose Asperger’s syndrome has shaped her advocacy, to Sor Juan Inés de la Cruz, a 17th-century nun and poet whose outspoken views on women’s role in society scandalized audiences.

Other stories include: Mary Edwards Walker, a Civil War surgeon who was arrested more than once for wearing pants; Marie Curie and her daughter Irène, who worked side-by-side in their laboratory; Shirley Chisholm, who ran for president in 1972 and paved the way for generations of women in office; Ellen Johnson Sirleaf, the first woman to lead an African country; Manal al-Sharif, who captured the world’s attention in 2011 when she filmed herself driving a car in defiance of Saudi custom; Chimamanda Ngozi Adichie, whose wry and wise observations about feminism have changed the conversation; Ellen DeGeneres, who broke barriers in media and entertainment while making audiences laugh; as well as heroines in the Secretary and Chelsea’s own circles of friends and family, and more.

Secretary Clinton said, “Each of these women has fought and won the kinds of victories that pave the way for progress for all of us. To us, they are all gutsy women—leaders with the courage to stand up to the status quo, ask hard questions, and get the job done. This book is a continuation of a conversation Chelsea and I have been having since she was a little girl, and we are excited to welcome others into that conversation.”

“The gutsy women in this book share a fierce optimism that their work and lives will make a difference in the world. And, they’re right,” said Chelsea Clinton.  “We hope readers will draw strength from their stories as we have, because if history shows one thing, it’s that the world needs more gutsy women.”

“THE BOOK OF GUTSY WOMEN is an inspiring and entertaining account of some of the most phenomenal women in the world,” added Jonathan Karp, President & Publisher of Simon & Schuster. “Destined to be a classic in the tradition of Profiles in Courage, The Book of Virtues and We Should All Be Feminists, this groundbreaking celebration of gutsiness is a call to action – not just for women, but for all of us, especially now.”

Carolyn Reidy, President and Chief Executive Officer of Simon & Schuster, Inc. acquired world publishing rights in all formats of the book from attorney Robert B. Barnett of Williams & Connolly, who represents Secretary Clinton. Chelsea Clinton is represented by Tara Kole. The book will be published by the Simon & Schuster trade imprint and will be edited by Vice President & Executive Editor Priscilla Painton. The book will also be published by Simon & Schuster’s international companies in Australia, Canada, India and the United Kingdom, and as an audiobook read by the authors.

Secretary Clinton is the author of six previous books, all published by Simon & Schuster: IT TAKES A VILLAGE (1996); DEAR SOCKS, DEAR BUDDY: Kids’ Letters to the First Pets(1998); AN INVITATION TO THE WHITE HOUSE: At Home With History (2000); LIVING HISTORY (2003); HARD CHOICES (2014); and WHAT HAPPENED (2017). All of her memoirs have been instant #1 New York Times bestsellers.

Chelsea Clinton is the author of the #1 New York Times bestseller SHE PERSISTED: 13 American Women Who Changed the World (2017); DON’T LET THEM DISAPPEAR: 12 Endangered Species Across the Globe (2019); SHE PERSISTED AROUND THE WORLD: 13 Women Who Changed History (2018); START NOW! You Can Make a Difference (2018); IT’S YOUR WORLD: Get Informed, Get Inspired & Get Going! (2015); and, with Devi Sridhar, GOVERNING GLOBAL HEALTH: Who Runs the World and Why? (2017)