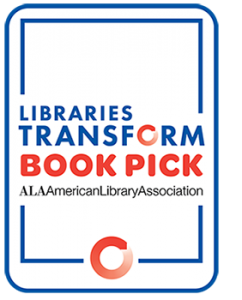 The Libraries Transform Book Pick is a new digital reading program that connects readers nationwide by offering free access to the same ebook through public libraries.

At the same time, it gives public libraries and the professionals working there opportunities to engage with readers about the ebook, as well as showcase digital collections and other library resources and programs.

Participating is easy! Do you have a public library card? Great! (And if you don’t, visit your library to get one.) Does your public library use OverDrive to serve your community’s ebook needs? (Most do, but if you aren’t sure, check back during October 7-21 to find a library.) All public libraries in the U.S. currently participating in OverDrive will be ready to lend unlimited copies of the ebook to borrowers during the reading period October 7-21, 2019, which makes it a great pick for your book club. Not a member of a book club? Discuss After the Flood with us on social media using the hashtag #LTBookPick.

Cool! But what are we reading? 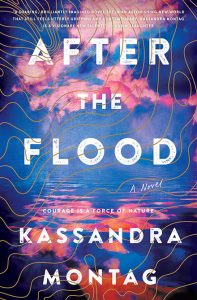 The Book Pick — After the Flood

By Kassandra Montag
Published by William Morrow, an imprint of HarperCollins Publishers
Available for download October 7-21

An inventive and riveting epic saga, After the Flood signals the arrival of an extraordinary new talent.

A little more than a century from now, our world has been utterly transformed. After years of slowly overtaking the continent, rising floodwaters have obliterated America’s great coastal cities and then its heartland, leaving nothing but an archipelago of mountaintop colonies surrounded by a deep expanse of open water.

Stubbornly independent Myra and her precocious seven-year-old daughter, Pearl, fish from their small boat, the Bird, visiting dry land only to trade for supplies and information in the few remaining outposts of civilization. For seven years, Myra has grieved the loss of her oldest daughter, Row, who was stolen by her father after a monstrous deluge overtook their home in Nebraska. Then, in a violent confrontation with a stranger, Myra suddenly discovers that Row was last seen in a far-off encampment near the Arctic Circle. Throwing aside her usual caution, Myra and Pearl embark on a perilous voyage into the icy northern seas, hoping against hope that Row will still be there.

A note from Donna Seaman, the Booklist editor who helped select this title: “As we pondered the criteria for the Libraries Transform Book Pick,” Booklist’s Adult Books Editor Donna Seaman observed, “we found ourselves––and by ‘we’ I’m referring to myself, Senior Editor Susan Maguire and Associate Editor Annie Bostrom––galvanized by how the overarching theme of transformation is manifest in such totality and so very dramatically in Kassandra Montag’s After the Flood, a speculative epic set in a world ravaged by climate change. We also felt that the strong women protagonists in this tale of a mother’s quest for a lost daughter made for exciting reading, as does Montag’s skill in provoking us to think about timely issues as she holds us rapt with the timeless thrills of heroism, adventure, and suspense. After the Flood is an ideal catalyst for lively and probing book-club discussions.”

Discuss After the Flood on social media using the hashtag #LTBookPick.

Readers Entertainmenthttp://dayagency.com
Previous articleSNEAK PEEK: Out of the Shadows: Love, Lies & Consequences (Book 4) by Natasha D. Frazier
Next articleTop 5 Film Adaptations That Will Get Your Family to Read the Book