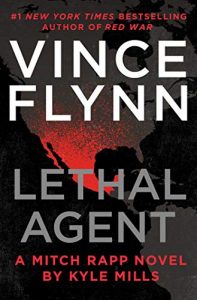 Surviving a previous attack by Mitch Rapp in Iraq…..ISIS leader, Sayid Halabi, has been recovering, as much as he can, from his wounds. During his recovery, Halabi has had plenty of time to think, plan, organize, and plot……revenge.

A team from “Doctors Without Borders” is in a small village caring for the people ravaged by an as yet unknown virus they have dubbed: YARS for Yemeni Acute Respiratory Syndrome. It is more contagious and deadly than the 1918 Spanish Flu virus. The team of specialists need to contain this virus…… or millions could die.

Senator Christine Barnett is the leading candidate to succeed President Alexander come election day. Christine is fomenting fear and hate among her supporters (sounds familiar!) and is waging a very successful campaign to gain the ultimate power…..the Presidency of the United States.

NASA stumbled upon a tunnel leading to a mall in the United States from Mexico, and the DEA has just successfully stopped a shipment of drugs coming through that newly discovered tunnel. But hidden within that stash of drugs is…….something much more sinister, and deadly.

A devastating attack on the United States, and the World, is about to take place. Millions upon millions of lives are at stake and only one person stands in the way…….Mitch Rapp.

“Lethal Agent” is a fast, brutal, thriller that will leave you scared out of your pants. Up to date with the state of this union in 2019, “Lethal Agent” offers the reader a foreboding sense as to how hate, distrust of intelligence agencies, fear, the quest for ultimate power (the “Chosen One”) and ignorance……can open the door for disaster rather than closing it.