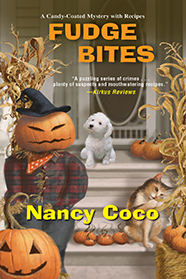 Halloween on Mackinac Island is a season of fun tricks, but finding a corpse is no treat for fudge shop owner Allie McMurphy

Night Of The Really Dead

It’s late October, off-season for tourists, but locals are up and lurching for the annual zombie walk charity event. Though everyone’s living it up, trouble is just a few pawprints away. Allie follows the bloody tracks of her calico cat, Carmella, to a body in the alley behind the Historic McMurphy Hotel and Fudge Shop. Unlike the island’s other walking dead, this one’s flatlined for good. It seems that someone is using the zombie fest as the perfect backdrop for murder. Now amateur sleuth Allie and dreamboat officer Rex Manning must use every trick in their treat bag to unmask a killer in disguise.

Praise for Nancy Coco and the Candy-Coated Mysteries

“I will be counting down the days until the next mystery with Allie McMurphy.” —Cozy Mystery Book Reviews

You can purchase FUDGE BITES at:
Kensington Books 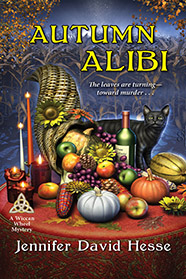 After a hectic year, Edindale, Illinois, attorney Keli Milanni is ready to welcome autumn by counting her many blessings. But a case of murder could cause her to fall behind…

Keli is hoping that Mabon, the Wiccan Autumn Equinox, will bring balance back into her life. But it’s death that comes calling when she’s asked to consult on an estate case. Recently passed, Elaine Turnbull left everything, including her valuable art and antiques collection, to her granddaughter, Lana. But Lana has been missing for years, ever since a tragedy tore her family apart. Also missing may be Elaine’s most recent will. Then there’s the not-so-small detail that Elaine’s death by natural causes may not have been so natural after all…

With the help of her boyfriend Wes, who knew Lana in high school, Keli starts digging into Elaine’s past—and her journals. Soon she discovers that everyone, from Elaine’s caretaker to her curator, had a motive for murder—along with a seemingly rock-solid alibi. Between missing people, missing documents, a string of vandalism against her friends, and the sense she’s being stalked, Keli is feeling a disturbing chill. Now not even her Wiccan protection rituals may save her from a killer with a cold heart that’s far from grateful…

You can purchase AUTUMN ALIBI at:
Kensington Books 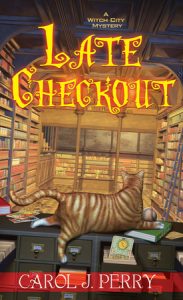 Field reporter Lee Barrett is not happy that her hours are being cut back at WICH-TV, although it is nice to spend more time volunteering with Aunt Ibby, a research librarian at Salem’s main branch. But Lee’s least favorite task is going up to the stacks, a spooky, seldom-frequented upper section of the library. On this day she has good reason to be afraid—she finds a dead man, surrounded by hundreds of scattered books and torn-out pages.

Her police detective beau, Pete Mondello, is soon on the scene, and the deceased is identified as a former minor league baseball player—and ex-con—named Wee Willie Wallace, who hasn’t been seen in Salem for twenty years. With help from her friend River’s Tarot reading, her clairvoyant cat O’Ryan, and Lee’s own psychic gifts, she steps up to the plate to catch the killer who took the old ballplayer out of the game…

You can purchase LATE CHECKOUT at:
Kensington Books 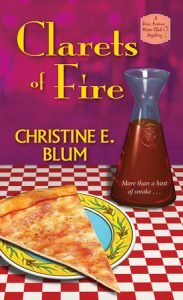 Halsey and the ladies of the Rose Avenue Wine Club are celebrating with newlyweds Penelope and Malcolm, who are thrilled to be opening their new winery. They’re also partnering with a cherished neighborhood eatery, Rico’s Pizza, which will be serving young clarets from their fall harvest. But as Halsey attempts to savor the bouquet of her Tooth & Nail Cab, a different scent intrudes—smoke. The nearby pizza parlor is going up in flames. As they rush to the scene, Halsey’s rescue dog Bardot pulls a body from the burning building—the pizza delivery driver—but it’s too late.

When investigators determine a rag soaked with gasoline in a bottle from the winery started the blaze, police suspect both the pizza parlor owners and Penelope and Malcolm of arson and murder. With her friends’ business and freedom at stake, it’s up to Halsey to smoke out the real arsonist—before somebody else gets scorched….

You can purchase CLARETS OF FIRE at:
Kensington Books 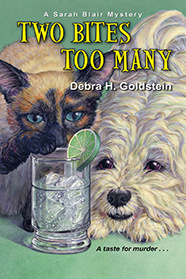 Far from a domestic goddess, Sarah Blair would rather catch bad guys than slave over a hot stove. But when a dangerous murder boils over in Wheaton, Alabama, catching the killer means leaving her comfort zone…

Things are finally looking up for Sarah Blair following her unsavory divorce. Settled into a cozy carriage house with her sassy Siamese cat, RahRah, she has somehow managed to hang on to her modest law firm receptionist job and—if befriending flea-bitten strays at the local animal shelter counts—lead a thriving social life. For once, Sarah almost has it together more than her enterprising twin, Emily, a professional chef whose efforts to open a gourmet restaurant have hit a real dead end…

When the president of the town bank and city council is murdered after icing Emily’s business plans, all eyes are on the one person who left the scene with blood on her hands—the Blair girls’ sharp-tongued mother, Maybelle. Determined to get her mom off the hook ASAP, Sarah must collect the ingredients of a deadly crime to bring the true culprit to justice. But as neighbors turn against her family, can she pare down the suspects before another victim lands on the chopping block?

You can purchase TWO BITES TOO MANY at:
Kensington Books