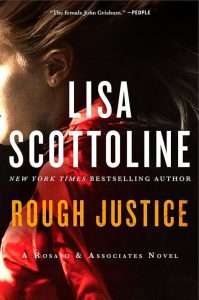 If you read my last review on “Legal Tender” you know that I complained about each book in this “series” (Rosato & Associates) only having new characters. Well……in book #3, “Rough Justice”, the series FINALLY includes the old characters we have come to know and love. Whew! No more complaints from me.

Marta Richter is a high-powered defense attorney temporarily in Philadelphia to defend multi-millionaire, Elliot Steere, against a charge of murder.

Steere was driving home one night, in his brand new, white convertible when he was stopped at a traffic light in a seedy part of Philly. A homeless man approached him, demanded his car, and slashed him in the face with his knife. Steere got out of the car to defend himself then shot the homeless man……dead.

Some think he did it on purpose, some feel he acted in self-defense.

Marta did a great job defending Steere with the help of a local law firm, Rosato & Associates, and two young attorney’s: Mary DiNunzio and Judy Carrier. The jury is in charge now, but, they are expected to return a not guilty verdict.

All is well in Marta’s world.

Then in a meeting after the jury left the courtroom…..Steere accidentally told Marta that the homeless man struggled in his grasp.

Marta corrected him: “You struggled in HIS grasp, not the other way around”.

“I’m guilty as sin, dear, everything that went on in the trial was fiction.”

Marta is SHOCKED and what happens next involves murders, car chases, ski chases, a huge snowstorm, my favorite lawyer getting shot, and, ultimately, a mystery that needs to be solved (and a jury informed) before tomorrow morning. All in the worst snowstorm in decades.

“Rough Justice” is a fantastic, fast, fun, bloody, intriguing, read. I loved it!

(And it is now, officially, a series!)

Jocie McKadehttps://www.jociemckade.com/
Her fiction writing has received the Author / Ambassador at Library Journal Self-e Authors, Winner Queen of the West Reader Favorite Award, Amazon Bestseller - Historical, Double finalist in the Next Generation Indie Book Awards in the Mystery and Humorous Categories. Writing humorous cozy mysteries and romantic comedy, Jocie can find humor in most everything, even when she shouldn't. She lives in the Midwest on Dust Bunny Farm with her family.
Previous articleStacey Abrams to Write Book on Voter Suppression
Next articleSLAUGHTERHOUSE-FIVE by Kurt Vonnegut to be Graphic Novel