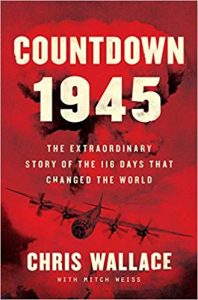 On June 9, Chris Wallace, the veteran journalist and anchor of Fox News Sunday, will release Countdown 1945: The Extraordinary Story of the 116 Days that Changed the World, it was announced today by Avid Reader Press, an imprint of Simon & Schuster. In Countdown 1945, Wallace delivers an electrifying behind-the-scenes account of the secret meetings and events across the globe during the 116 days leading up to the world’s first use of the atomic bomb in wartime—the American attack on Hiroshima on August 6, 1945. This August marks the 75th anniversary of the bombing.

On April 12, 1945, after years of bloody conflict in Europe and the Pacific, America was stunned by news of President Franklin D. Roosevelt’s death. Countdown 1945 tells the story of the turbulent days, weeks, and months to follow, leading up to August 6, 1945, when new President Harry Truman gives the order to unleash the world’s first atomic bomb. Wallace and cowriter Mitch Weiss take readers inside the minds of the iconic and elusive figures who join the quest for the bomb, each for different reasons: the legendary Albert Einstein, who eventually calls his vocal support for the atomic bomb “the one great mistake in my life”; lead researcher Robert “Oppie” Oppenheimer and the Soviet spies who secretly infiltrate his team; the fiercely competitive pilots of the plane selected to drop the bomb; and many more. Perhaps most of all, Countdown 1945 is the story of an untested new president confronting a decision that he knows will change the world forever.

But Countdown 1945 is more than a book about the atomic bomb. It’s also an unforgettable account of the lives of ordinary American and Japanese civilians in wartime—from “Calutron Girls” like Ruth Sisson in Oak Ridge, Tennessee, to ten-year-old Hiroshima resident Hideko Tamura, who survives the blast at ground zero but loses her mother, and later immigrates to the United States, where she lives to this day—as well as American soldiers fighting in the Pacific, waiting in fear for the order to launch a possible invasion of Japan.

Jonathan Karp, President and Publisher of Simon & Schuster Adult Publishing, commented, “I’ve admired Chris Wallace’s work for decades, and in Countdown 1945 he marshals his vast knowledge of politics and global affairs to tell the story of one of the most consequential episodes in history with great insight and humanity. This is a riveting work of history by an author we hope will be counting down significant historical events for years to come.”

Chris Wallace is the anchor of Fox News Sunday, Fox Broadcasting’s Sunday morning public affairs program. He joined Fox News in 2003. In his sixteen years at Fox, Wallace has covered almost every major political event, and he has interviewed U.S. and world leaders, including seven American presidents. Wallace was the first journalist from Fox News to moderate a general election presidential debate in October 2016. Throughout his fifty-plus years in broadcasting, Wallace has won every major broadcast news award for his reporting, including three Emmy Awards, the Dupont-Columbia Silver Baton, and the Peabody Award.

Mitch Weiss is a Pulitzer Prize–winning investigative journalist for the Associated Press, covering subjects ranging from military misconduct, government corruption and white collar crimes to the housing meltdown and unsafe medical devices. He is also the critically acclaimed author or coauthor of seven books.
North American rights to Countdown 1945 were acquired by Jofie Ferrari-Adler of Avid Reader Press, from Claudia Cross of Folio Literary Management and Larry Kramer of Kramer Talent Management. The book will be published simultaneously in hardcover, ebook, and audio editions.

Additional information can be found at www.CountdownBook.com.

Jocie McKadehttps://www.jociemckade.com/
Her fiction writing has received the Author / Ambassador at Library Journal Self-e Authors, Winner Queen of the West Reader Favorite Award, Amazon Bestseller - Historical, Double finalist in the Next Generation Indie Book Awards in the Mystery and Humorous Categories. Writing humorous cozy mysteries and romantic comedy, Jocie can find humor in most everything, even when she shouldn't. She lives in the Midwest on Dust Bunny Farm with her family.
Previous articleHarlequin Adds Inclusive Romance Line Carina Adores
Next articleThere’s a Book for That: Martin Luther King, Jr. Day