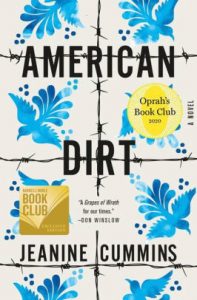 American Dirt by Jeanine Cummins as the February 2020 selection for the Barnes & Noble Book Club, a monthly book club designed to bring readers in communities across the country together to discuss the most compelling books. Barnes & Noble is selling a special, exclusive Book Club edition of American Dirt as well as hosting a free Book Club night for customers to discuss the novel in stores across the country on March 10, at 7 PM local time. Customers can purchase the exclusive edition at Barnes & Noble stores or at BN.com.

“With Jeanine Cummins’ American Dirt, we have a selected a book that will resonate with our customers and stay with them long after they turn the final page,” said Liz Harwell, Senior Director of Merchandising, Trade Books at Barnes & Noble. “American Dirt is a heart-racing page turner that takes readers into the heart of the migrant crisis.”

“I’m thrilled that Barnes & Noble has chosen American Dirt for their book club,” said author Jeanine Cummins. “This story came about because I felt there was a dueling narrative about migrants from each side of the political spectrum where the actual people involved were forgotten. I wanted to write a novel to hopefully start a new conversation about migrants as human beings, and so I am delighted to know that book clubs around the country will be discussing American Dirt. I hope it generates lots of conversation, and I can’t wait to hear the discussions.”

Barnes & Noble holds Book Club discussions about one month after the Company’s Book Club pick is published. The Barnes & Noble Exclusive Edition of American Dirt includes a personal essay from Jeanine Cummins, as well as a discussion guide.

Previous Barnes & Noble Book Club selections include: The Female Persuasion by Meg Wolitzer, Clock Dance by Anne Tyler, An Absolutely Remarkable Thing by Hank Green, The Only Woman in the Room by Marie Benedict, The Last Romantics by Tara Conklin, The Island of Sea Women by Lisa See, Lost Roses by Martha Hall Kelly, The Guest Book by Sarah Blake, Mrs. Everything by Jennifer Weiner, The Nickel Boys by Colson Whitehead, Inland by Téa Obreht, The Testaments by Margaret Atwood, Ninth House by Leigh Bardugo and The Family Upstairs by Lisa Jewell, and Dear Edward by Ann Napolitano.

For more details, customers can ask one of their local, knowledgeable Barnes & Noble booksellers, or check the Barnes & Noble Store Locator for event information. They can also join the conversation on Twitter, Instagram, Pinterest, Snapchat (bnsnaps) and Facebook, using hashtag #BNBookClub.

Jocie McKadehttps://www.jociemckade.com/
Her fiction writing has received the Author / Ambassador at Library Journal Self-e Authors, Winner Queen of the West Reader Favorite Award, Amazon Bestseller - Historical, Double finalist in the Next Generation Indie Book Awards in the Mystery and Humorous Categories. Writing humorous cozy mysteries and romantic comedy, Jocie can find humor in most everything, even when she shouldn't. She lives in the Midwest on Dust Bunny Farm with her family.
Previous articleHarlequin Love Inspired Now Accepting Submissions
Next articleSNEAK PEEK: Sedona Seduction by Lisa Kessler