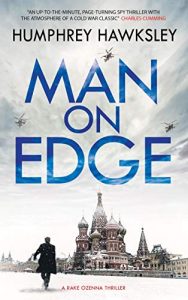 A hard-as-nails hero, an out-of-the-ordinary location, and oodles of high-action encounter—it’s everything readers want in a political thriller–David Keymer, Library Journal

A tense and twisting espionage thriller involving state secrets, lethal assassins and the threat of a new Cold War.

MAN ON EDGE
Trauma surgeon Carrie Walker is taken aback when her estranged uncle makes contact out of the blue. Senior Russian naval officer Artyom Semenov claims to be in possession of an explosive piece of information which he is offering to share with the West. But can he be trusted?

Travelling to Moscow undercover to meet with Semenov, Carrie finds herself stranded when the operation goes catastrophically awry. In grave danger, there’s only one person she can turn to for help: her former fiancé, Major Rake Ozenna of the Alaska National Guard.

Aware how vital it is that he reaches Carrie, Rake knows he’s pitted against a lethal enemy. As preparations gather pace for a high- profile Arctic NATO exercise,  Rake must act fast if he is to save Carrie and prevent a global catastrophe.

Reviews so far for MAN ON EDGE

The scene-setting is vivid, the geopolitics a balanced backdrop
Adam LeBor, Financial Times

Can Rake and his allies possibly cut through the fog of triple-crosses and alliances of convenience….The pace is furious, the casualty list breathtaking.
Kirkus Review

The best thriller writer we have
Rod Liddle, columnist, Sunday Times, the Sun, the Spectator

A tough, uncompromising hero raised on the remote Alaskan island of Little Diomede in the Bering Strait. Two thrillers of Global Noir. MAN ON ICE explodes onto the frozen US-Russian; MAN ON EDGE moves Rake Ozenna to Norway and the tense Russian-NATO border

Hawksley is a master at ramping up the tension; then turning the screw a little more …. Rake Ozenna is proving to be one of the more believable characters in a crowded field
Adam Colclough, Shots Crime and Thriller

Hawksley’s hero, Rake Ozenna, is smart and tough, and we’re glad to have him on our side

Humphrey Hawksley is available for interviews, media appearances, speaking engagements, and/or book review requests – please contact mickey.creativeedge@gmail.com by email or by phone at 403.464.6925.  We look forward to hearing from you about coverage.

Jocie McKadehttps://www.jociemckade.com/
Her fiction writing has received the Author / Ambassador at Library Journal Self-e Authors, Winner Queen of the West Reader Favorite Award, Amazon Bestseller - Historical, Double finalist in the Next Generation Indie Book Awards in the Mystery and Humorous Categories. Writing humorous cozy mysteries and romantic comedy, Jocie can find humor in most everything, even when she shouldn't. She lives in the Midwest on Dust Bunny Farm with her family.
Previous articleFOUR! Book two in the Highwayman series By MJ Preston!
Next articleBESTSELLING AUTHOR JEFF KINNEY TO PUBLISH FIRST WIMPY KID FANTASY BOOK